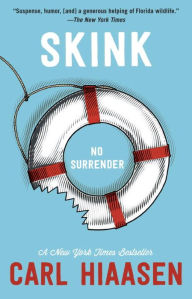 When your cousin goes missing under suspicious circumstances, who do you call? There’s only one man for the job: a half-crazed, half-feral, one-eyed ex-governor named Skink. Skink joins 14-year-old Richard on a breakneck chase across Florida, undaunted by lightning storms, poisonous snakes, flying bullets, and giant gators. There are a million places cousin Malley could […]

Redemption by Alla Kar  (Huntsville #1)  Published by: Swoon Romance Publication date: November 27th 2015 Genres: Contemporary, New Adult, Romance Synopsis: His second chance may cost him his sweetest addiction … The truth about NEVEAH’S cheating fiancée hit hard—but not as hard as her right hook to his jaw. After ridding herself of him she travels back home to Huntsville, Texas […]

Crystallum by Laney McMann  (Primordial Principles #1)  Published by: Booktrope Publishing Publication date: October 25th 2015 Genres: Urban Fantasy, Young Adult Synopsis: Kadence Sparrow wasn’t born a devil’s child—she was turned into one. Now, she’s hiding from the truth, and running for her life. For years, Kade’s true nature has lurked behind an illusion, so when her dad gets another […]

FIVE: Out of the Ashes by Holli Anderson  (Five, #3)  Published by: Curiosity Quills Press Publication date: November 30th 2015 Genres: Urban Fantasy, Young Adult Synopsis: Their last battle ended with death and despair, but they have no time to mourn. One of their own has been taken and the Quinae Praesidia set out to find and rescue her. In […]

Nashville Nights Boxed Set by Stacey Mosteller  Published by: Swoon Romance Publication date: November 27th 2015 Genres: New Adult, Romance Description: Save Me From Myself (Nashville Nights Book 1) Tragedy and betrayal sent her running… And now she’s starting over far away from the person she used to be. Lyric Hayes tried to be the perfect daughter and the perfect […]

Scorned by Marie Long  (The Anderson Brothers, #3)  Publication date: December 1st 2015 Genres: New Adult, Romance Synopsis: Since the age of fifteen, Michael “Knox” Anderson has been avoiding the demons that chase him. Estranged from his brothers and scorned by society, twenty-five-year-old Michael replaces his feelings of abandonment with the dangerous world of illegal underground cage fighting. Michael […]