On November 1st I got to meet this lady named Charlaine Harris. Have you heard of her? All day long I was so excited to meet her and to have her sign my book. Then reality hit me…This is the lady that brought Sookie, Eric and Bill to life! Now, I was no longer excited…I was horribly nervous! I was in the VIP Reception Room to meet her and I didn’t eat any of the yummy looking food they had out, I didn’t want to talk to anyone and I felt like throwing up. I never get this way so I was shocked on what my body was doing to me. Finally she walked in and sat at table and we could go up to her to have our books signed and our pictures taken. I was shaking the whole time I was in line and when it was my turn I told her I was so nervous about meeting her and she says, “I don’t bite.” I felt so much better after talking to her and getting my picture taken with her. After the reception it was on to hear her speak in the theater. She was so amazing! She is down to Earth and so funny! I have only read her Sookie Novels but after this I need to read her other series! 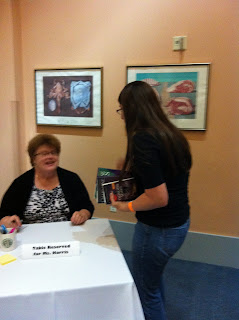 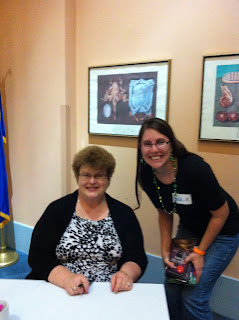 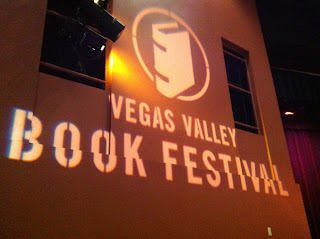 Some facts she threw out there before the questions started:
-40 years since she has been to Vegas.
-1981 was when her first book was published.
-It took two years for Dead Until Dark to get published. A month after it was published they wanted three more books from her.
-In May of 2013 will be the last Sookie Novel.
-She is doing a new series that will be set in Texas and it will be a man’s POV. She wants to see if she can “do men.”
-And this is her last public appearance for this year. 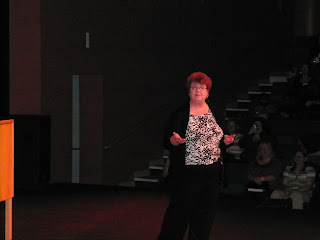 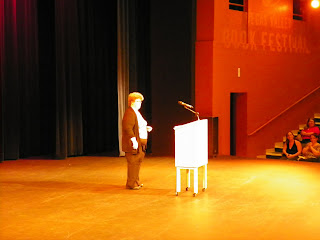 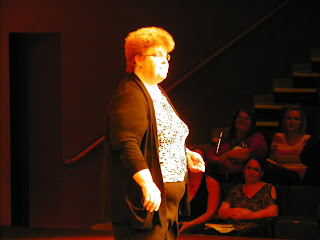 Here are a few question from the audience and her answering them:
What character do you think stayed the same from the book to the show?
–Jason
Did you enjoy what Alan Ball did with show?
–Yes, even if it’s a different direction. I don’t know what they’re doing with Bill-Lilith.
What inspires your love scenes?
–My husband wants me to say it’s him. But just because I’m 60 years old doesn’t mean I don’t know how to use my imagination.

What are you reading?
–I just read a good book but I can’t think of the name. But check my blog next week for it.
What were your emotions at the end of Sookie?
–Ecstatic! I finally tied the knot on 15 years of Sookie. But I said what I had to say!

If you weren’t a writer what would you be?
–I would work in a library.
Most embarrassing moment?
–At one of the season premieres of True Blood I had a V neck top on and we had to use the body tape to keep the top closed, well Alexander let me know that the tape wasn’t working.

Are your characters based off anyone you know?
–No 😉 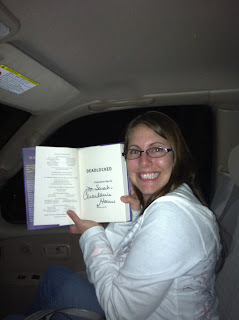 3 responses to “A Night With Charlaine Harris”