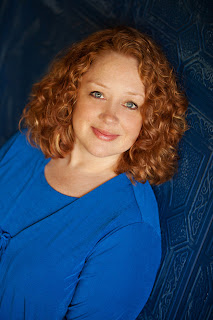 BIO: Anne Greenwood Brown grew up sailing the Apostle Islands on Lake Superior, leaning over the bow, and wondering what amazing thing might flash by. Now she knows. Anne lives in Minnesota with her patient husband and three hilarious children. 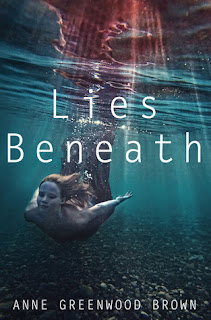 Description: The lore of mermaids and mermen is real! As Gretchen McNeil, author of Possess, says, “Riveting! A cold-blooded tale of secrets, revenge, and forbidden love that will leave you terrified to go in the water.”
Calder White lives in the cold, clear waters of Lake Superior, the only brother in a family of murderous mermaids. To survive, Calder and his sisters prey on humans and absorb their positive energy. Usually, they select their victims at random, but this time around, the underwater clan chooses its target for a reason: revenge. They want to kill Jason Hancock, the man they blame for their mother’s death.

It’s going to take a concerted effort to lure the aquaphobic Hancock onto the water. Calder’s job is to gain Hancock’s trust by getting close to his family. Relying on his irresistible good looks and charm, Calder sets out to seduce Hancock’s daughter Lily. Easy enough, but Calder screws everything up by falling in love–just as Lily starts to suspect there’s more to the monster-in-the-lake legends than she ever imagined, and just as the mermaids threaten to take matters into their own hands, forcing Calder to choose between them and the girl he loves.

One thing’s for sure: whatever Calder decides, the outcome won’t be pretty.


Lisa’s Review: First of all I have to say I loved that this books setting is around the Apostle Islands. Reading the descriptions brought me back to when I went on vacation on the Islands. I loved that the book is in Calder’s POV and I will admit I love his character. I thought the book flowed nicely and was well written. This was an enjoyable read and I can’t wait for book 2. 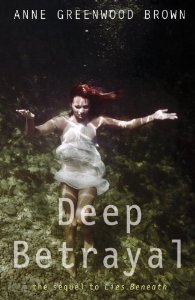 
Once you dive into Deep Betrayal, the sequel to Lies Beneath, you won’t come up for air!

It’s been thirty days, two hours, and seventeen minutes since Calder left Lily standing on the shores of Lake Superior. Not that she’s counting. And when Calder does return, it’s not quite the reunion Lily hoped for. Especially after she lets her father in on a huge secret: he, like Calder, is a merman. Obsessed with his new identity, Lily’s dad monopolizes Calder’s time as the two of them spend every day in the water, leaving Lily behind.

Then dead bodies start washing ashore. Calder blames his mermaid sisters, but Lily fears her father has embraced the merman’s natural need to kill. As the body count grows, everyone is pointing fingers. Lily doesn’t know what to believe—only that whoever’s responsible is sure to strike again. . . .

What is your favorite meal to prepare? Wow! Right when I think I’ve been asked every question imaginable! I really enjoy making traditional Thanksgiving dinner. I make an amazing stuffing with sausage, onions, and apples. So long as someone else cleans up, hands down, that’s my favorite meal.
What prompted you to become a writer? I don’t know if I ever decided to become a writer. I always just wrote. I was writing stories when I was five. My dad would publish them on his office copier and I’d try to sell them in my neighborhood for a dime.
If you could work with any author, who would it be? Maggie Stiefvater (Hi, Maggie. Call me!)
Who is your favorite author and is your writing style similar to theirs? John Irving is a favorite author because I love the way he embraces the absurd. I’ve been told my style is lyrical, but I hesitate to compare myself to anyone else.
What are your must-have writing accessories? A lap top, a cup of coffee, and Google.
The dreaded writer’s block; ever have it? If so, what do you do to get through it? I usually have my stories outlined pretty well, so it’s not really “block”–in that I know what’s supposed to happen next. But sometimes I do get into ruts where I don’t feel inspired to write. When that happens I find a new book to read. Hot showers help, too.
Is there anything you find particularly challenging in your writing? Group scenes are hard with lots of people talking at the same time.
Have you ever been to the Apostle Islands? What is your favorite spot? Absolutely! I spent my summers there growing up, and my mom and aunts still live there during the summers. Madeline Island is my favorite, but also Stockton and Raspberry Islands.
Was it difficult to write from Calder’s perspective? At first, yes. It took me awhile to get the feel for his voice, but then once I did, it was hard to write as Lily in Book #2 (Deep Betrayal, March 12)
How would you describe Lies Beneath? Lies Beneath takes a different approach than most YA novels in that it has a male point of view, the love story is not particularly tidy, and the mermaids are murderous, rather than girly. It’s an evolution story about an animal who turns into a man.
If you had to do it all over again, would you change anything in Lies Beneath? Probably because I never feel like I’m done editing. I suppose if I had to pick one thing, I would have Lily explain why she goes to the cave, instead of running in the opposite direction. Because Lies Beneath is told from Calder’s first person point of view, you can’t know Lily’s mind and a lot people wonder about that.
What can we expect in Deep Betrayal? Well, because it’s told from Lily’s point of view, you’ll get more insight into Lily’s motivations. You’ll also get a murder mystery, some mermaid legends, and a lesson in  DNA.
Can you share a little of your current work with us? Right now I’m working on a stand alone book called Playing Cards with Sophocles. That’s all I’m going to say.
What question have you always wanted to be asked in an interview? How would you answer that question? Q: What fictional character would you most like to be? A: Anne Shirley (Anne of Green Gables)
Do you have anything specific that you want to say to your readers? Thanks for reading! Thanks for loving books and keeping pens in our hands (and laptops on our knees).