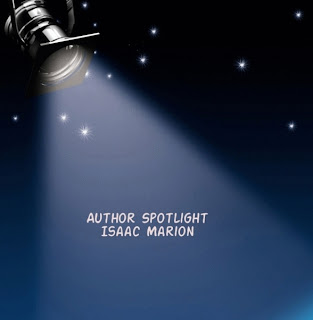 Bio: (As stated on Isaac’s website) Isaac Marion was born near Seattle in 1981 and has lived in and around that city ever since. He began writing in high school and self-published three novels before finally breaking through with Warm Bodies. He currently divides his time between writing, playing obscure instruments in obscure bands, and exploring the country in a 1977 GMC motorhome named Baleen. 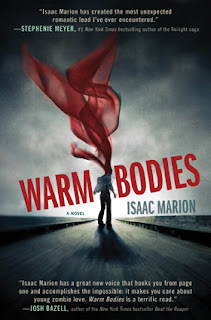 R is having a no-life crisis—he is a zombie. He has no memories, no identity,
and no pulse, but he is a little different from his fellow Dead. He may
occasionally eat people, but he’d rather be riding abandoned airport escalators,
listening to Sinatra in the cozy 747 he calls home, or collecting souvenirs from
the ruins of civilization.

And then he meets a girl.
First as his captive, then his reluctant house guest, Julie is a blast of
living color in R’s gray landscape, and something inside him begins to bloom. He
doesn’t want to eat this girl—although she looks delicious—he wants to protect
her. But their unlikely bond will cause ripples they can’t imagine, and their
hopeless world won’t change without a fight.

Review by Lisa: I totally loved this book. Yes I know, zombies scare some of you but this book is so much more then zombies. Zombies can be beautiful….and R definately is a beautiful character. Can I just say that I love R!! Isaac’s writing is outstanding and comical. This is a must read!!

What is your favorite ice cream?

Adult Isaac loves salted caramel. Child Isaac sometimes sneaks out and orders bubblegum.
If you could work with any author who would it be?
I can’t really imagine co-writing something; I’m not a very collaborative artist, so I’ll assume you mean what author would I want to work construction with. I’d love to have Cormac McCarthy as the project foreman for a HVAC installation job. It’d be magical to hear him describe the layout of the ductwork with obscure 18th century vernacular, and he’d deliver some deeply profound curses when he cuts himself with a Saws-All.

Who is your favorite author and is your writing style similar to theirs?

I definitely don’t have a single favorite author. It’s actually pretty rare that I even read more than one book by the same author. There are just too many different voices out there that I want to sample. If I was forced to pick a favorite, it might be Charlie Kaufman, but he doesn’t even write novels so it’s hard to compare our styles.

What gave you inspiration for Warm Bodies?
I’ve always been interested in writing from the perspectives of people and things that are alien to me, just to see what comes out. It can lead to some interesting new angles on everyday life. Warm Bodies started with the idea that it’d be fascinating to examine life through the eyes of a corpse. From there, it evolved into a very personal story drawn from my own transformation from a depressed, apathetic, post-religious burnout to someone with a purpose and hope for the future.
Was it difficult writing in R’s POV?

He was surprisingly easy to relate to. I think everyone has felt like R at some point–lost, alone, lacking purpose and identity. I just put myself in that position, imagined how my own inner struggles might be amplified by an apocalypse and the complete loss of my humanity…and it flowed pretty freely from there.

Did you put anything about yourself into R’s character?
R is definitely a part of my personality. Maybe a younger version of me, before I started to understand myself and learn how to be comfortable in my skin. If you mix R and Perry together, that might be a fair representation of me.

If there was a zombie takeover what would you do?
Too many unknowns in that question for me to answer it. Viral zombies or magic zombies? Fast or slow? Global pandemic or local? I guess either way, I’d probably steal a yacht.
Have you watched the movie Warm Bodies yet?

I’ve seen an early, rough cut of it, which was great, but I haven’t seen the final version yet. I’m going to a sneak peak screening next week to watch it for the first time. It’ll be great to see it with a real audience and observe people’s reactions. If I hear someone talking trash, maybe I’ll jump them!
I read that your working on a sequel to Warm Bodies. Can you share a little of it with us?

I can’t share much yet, as I’m still getting it all hammered out in my head. I can tell you that it will be a bigger, darker, more complex story, and that it will be a conclusion, not the beginning of a series.

What question have you always wanted to be asked in an interview? How would you answer that question?

Interviewer: “I just purchased the Space Shuttle from NASA, and I want to give it to you, along with my beautiful daughter, who is a trained pilot and astronaut and massage therapist. Are you interested?”
Me: “YES!”
Do you have anything specific that you want to say to your readers?

Hi readers! Wanna chug some Shiraz and make out in a Dennys?

And now for the giveaway: