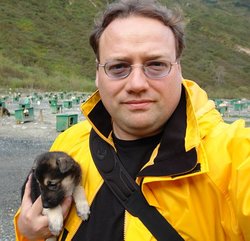 Iain Reading is passionate about Root Beer, music, and writing. He is
Canadian, but currently resides in the Netherlands working for the United
Nations.

Iain writes young adult novels. He is the author of the Kitty Hawk
Flying Detective Agency Series, The Wizards of Waterfire Series, and the dragon
of the month club.

What is your favorite writing snack?

Let me see….  favourite writing snack. I have to admit that when I get into writing mode that I am not much of a snacker.  But I do like to have a glass filled with ice nearby to chew on if I get thirsty.  Also, a lot of writing takes place at strange hours, so if there’s no left-over pizza lying around, if I get hungry I often have to improvise with what is in the cupboards.  Naan bread with peanut butter, perhaps?

Are you a plotter or a pantser?

I think I’m probably somewhere in-between the two.  I would never think of writing a book without knowing in at least a vague sense of where it’s going.  That said, I almost always am surprised over and over again along the way by the various twists and turns the story takes.  I always say that my writing planning process is like taking a ride on the subway.  You know the starting station and the end station.  And you know all the stops along the way.  But you have no idea what is going to happen in-between.

What are your must have writing accessories?

My iPod.  Definitely.  I tend to listen to the same song(s) over and over while I am writing – kind of like a mantra.  And I need a computer to write on, of course.  Oh, and the Internet.  And a stack of research books.

My favourite best advice would be something I once told myself:

I’d love to write books like The Magicians trilogy or The Lord of the Rings or The Voyage of the Dawn Treader or The Mosquito Coast.  But I can’t.  So to even try will just make me frustrated.

That is a really really really tough question.  I suppose if I could build a time machine (which is a great way to answer any question, isn’t it?) I would go back in time to when James Michener was still alive and I’d like to work with him on researching for one of his books.  I suppose my Kitty Hawk Flying Detective Agency series is a bit of a descendant of James Michener’s books about the long history of some of the most fascinating places in the world.

How did you come up with The Dragon of the Month Club?

It was a Saturday.  And I just kind of thought of the title.  But I didn’t really know what it would be about.  That took me until Sunday to figure out, but when I did it seemed so obvious.  A book about a secret club where you get new dragons to conjure every single month.  How much would I love to be in THAT club?

Which kind of dragon matches your personality?

Ohhh! Another difficult question.  I really had to think about this, and I am still not sure this is the right answer, but what about a Popcorn Dragon?  How funny would that little guy be, popping popcorn all over the place all the time?

What question have you always wanted to be asked in an interview?

Let me see….  No one has ever asked me if I have a favourite poem.

So what would my favourite poem be?  Well, I guess like a lot of people, the poems that touch me the most are those that take the form of words in music.  Lyrics.  And there’s an old song by a classic Canadian band called Mission which goes like this:

Ugh.  That’s a tough question too, although in this case because I am embarrassed to admit that I am not working on much.  Somehow I got the ideas for the next three Kitty Hawk books firmly set in my head, and I’ve even worked up some cover art and quite a few thousand words, not to mention puzzles.  But this year has been busy.  (How many people say that every day, huh?  The world’s lamest excuse.)

So I guess the answer is….  (drumroll)

That I am working on the next Kitty Hawk books.  Numbers six and seven (and eight).  Venice, Istanbul, Egypt and Tanzania.

I would definitely want to say thank you to all of them for reading my books.  Adventures shared are more adventurous and I am privileged to be able to have fans of my books and their characters from all around the world.

The Dragon Of The Month Club is the exciting first installment in a new book series that tells the story of Ayana Fall and Tyler Travers, two best friends who stumble across an extraordinarily magical book and soon find themselves enrolled as members of a very special and exclusive club – The Dragon of the Month Club.

On the thirteenth of every month a new dragon conjuring spell is revealed and the two friends attempt to summon the latest Dragon of the Month. The varieties are almost endless: Air Dragons, Paper Dragons, Fog Dragons, Waterfall Dragons, Rock Dragons, Tree Dragons – not to mention special bonus dragons for all the major holidays, including a particularly prickly Holly Dragon for Christmas.

But one day when a conjuring spell somehow goes wrong Ayana and Tyler find themselves unexpectedly drawn into a fantastical world of adventure based on the various books scattered all across Tyler’s messy bedroom. Traveling from one book-inspired world to the next with nothing to rely on but their wits and a cast of strange and exotic dragons at their disposal they must try to somehow find their way home again.

Drawing inspiration from some of literature’s most memorable stories – from 19th century German folktales to the streets of Sherlock Holmes’s London – the adventures of Ayana and Tyler bring these classic stories to life in delightfully strange and unexpected ways. Filled with fascinating detail and non-stop action these books will spark the imaginations of readers of all ages to inspire a life-long love of reading and seeking out books that are just a little bit off the beaten track.

To read an excerpt from the book, go to http://bookpublicityservices.com/dragon-month-club-iain-reading/

Lisa’s Review: I received a copy of this book in exchange for an honest review.

Ayana has endured some rough circumstances due to her parents splitting and having to relocate. She is also struggling with fitting in with her peers at her new school. Ayana then meets Tyler and they become instant best friends. While the two are at the library they find THE BOOK. This book is magic and shows them how to conjure up dragons. Each month there is a new spell for a new dragon. While they are conjuring one of the dragons they get sucked into a magical world which involve objects in Tyler’s bedroom.

I love this unique storyline. This book was fun to read and brought me back to my youth and the power of magical thinking.

The main characters Ayana and Tyler are awesome characters and really seem to balance each other. Where one is somewhat fearless, the other is much more cautious.

The pacing was good and kept my attention throughout. There are some really good actions scenes as well. My favorite was the part with the sharks.

I really want to be a member of this club and be able to collect dragons.

I think people of all ages will enjoy this book.

There is an
ongoing contest for readers to win a one-of-a-kind hardcover version of The Dragon of the Month Club with their
artwork as the cover.

“Draw a
picture! Write a story! Take a photograph! Bake some cookies! Mold a dragon out
of clay! Knit one out of yarn! Make one out of LEGO! Whatever you want! Just
let your imagination run wild because anything goes – the more creative the
better! Send your dragon in and then on the 13th day of every month one entry
will be chosen at random and featured on the official Dragon Of The Month Club
website. Each month’s lucky winner will also receive a free one-of-a-kind
personalized hard-cover edition of The Dragon Of The Month Club book featuring
their winning artwork (or other creative content) on the cover or inside the
book itself,” says Iain.

To
learn more, go to http://www.dragonofthemonthclub.com/


Giveaway!
-A paperback copy of The Dragon of the Month Club.
-Open Internationally.