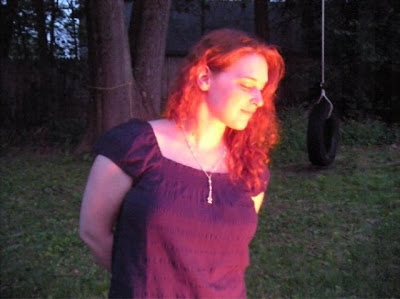 Bio.: Jennifer Allis Provost is a native New Englander who lives in a sprawling colonial along with her beautiful and precocious twins, a dog, a parrot (maroon bellied conure, to be exact), two cats, and a wonderful husband who never forgets to buy ice cream. As a child, she read anything and everything she could get her hands on, including a set of encyclopedias, but fantasy was always her favorite. She spends her days drinking vast amounts of coffee, arguing with her computer, and avoiding any and all domestic behavior.

Interview:
Who is your favorite author and is your writing style similar to theirs?

My all-time favorite author is Robin McKinley. I’ve loved everything I’ve ever read from her, from the Hero and the Crown to Sunshine to Pegasus. I think my writing style is somewhat similar to hers with regard to my descriptions, and the gradual reveal of information in Copper Girl is similar to Sunshine.
What’s a typical working day like for you? When and where do you write? Do you set a daily writing goal?

Typical day? I know not of what you speak…  All kidding aside, I have a rather intense day job, and I have three year old twins. I try to write for an hour or so each morning, while the house is quiet; on weekends, I get up early and try for a two to four hours. I relegate my marketing and social media work to evenings, after the twins are in bed.
What advice would you give aspiring writers?

Keep going! There are many bumps in the road – one-star reviews, publishers behaving badly, your computer catching fire before you’ve backed up your work (that actually happened to me!) – but you’ve just got to grow a thick skin, learn from your mistakes, and keep moving forward.
If you were writing a book about your life, what would the title be?


It Seemed Like A Good Idea At The Time – A Cautionary Tale Of One Writer Navigating the Publishing World
What are your must-have accessories while writing?

Even though I write primarily on my laptop, I keep a notepad and pens beside me, along with a high lighter. (I’m an office supply junkie.) I also have coffee nearby (Keurig is my god), low carb snacks, and comfy pillows.
Tell us about your book. How did you come up with that story line?

I used to work in an office that c ranked the air conditioning in the summer, so I would spend my lunch break outside warming up. I used to park in the back lot, under the shade, and one day I noticed this wacky, twisted-up tree, which was more like two trees than one. Those experiences became the first chapter of Copper Girl, though I didn’t get to meet any sexy elves.
Do you have a playlist for Copper Girl? If so, what songs are on it?

Lisa Amowitz, the greatest graphic designer there is. She writes too; you can find out more about Lisa here : Lisa’s Website
Did you put any of your own personality into Sara’s?

Oh most definitely, including but not limited to her sarcasm, tendency to thumb her nose at authority, and bad jokes.
What questions have you always wanted to be asked in an interview? How would you answer that question?

Q: Why did you become a writer?
A: I couldn’t not write. All my life, the stories have been welling up inside me. It was either set them free, or be diagnosed with schizophrenia.
Can you share a little of your current work with us?

How about an excerpt from the sequel to Copper Girl, Copper Ravens? Here’s the end of Chapter One, during which Sara grumbles about having offended an Elemental:
“How was I supposed to know that Old Stoney couldn’t drink wine?” I grumbled after one such gathering. Old Stoney was the de facto ruler of the earth Elementals, at least until the as yet unknown Inheritor of Earth surfaced. Speaking of surfaces, Old Stoney was of granite, specifically. Apparently, those of earth—or granite, at least—do not ingest liquid refreshment, since it rolls right on out of them like so much rain on asphalt. Little things like these were what I was expected to know, and I managed to come up short more often than not.

Exasperated, I flopped down on Micah’s bed. I was still a little weirded out calling it our bed.

“I can’t remember all these foolish names,” I muttered. Old Stoney’s actual name was Something Greymalkin, or maybe it was Something Greymountain. “Why isn’t anyone named Todd, or Jim?”
“Because we are not denizens of the Mundane World.” Micah crawled onto the bed beside me, and smoothed the hair back from my face. It had been done up in one of those elaborate confections that were a specialty of a silverkin, but by now it looked less like sleek waves, and more like a bird’s nest. A ratty, lopsided bird’s nest. “You think those of the Otherworld do not have trouble with Mundane names?”

“There are no Mundanes here, besides me and my family.” I snuggled up to Micah, enjoying a moment’s peace. “I really screwed things up, didn’t I?”

“Between me and Old Stoney?” I laughed, hiding my face against his throat. “Not likely. Remember, we of metal still have the upper hand.” Micah wrapped his arms around me, and as I moved to encircle his waist my own hand bumped his sword hilt.

“Can you use this?” I asked. I’d seen Micah perform a few incredible feats—such as ripping the head off an iron warrior with his bare hands—but I’d never seen him in a swordfight.

“I bet you’d look pretty hot chopping someone’s head off,” I murmured. Micah, who struggled with Mundane idioms as much as I struggled with Elemental names, rolled me onto my back.

“Very good.” He laughed, the gentle rumbles in his chest once again making everything right in the world. After a fair bit of snuggling, I asked, “Have you heard anything new about the queen?”

Oriana, the Gold Queen, had been captured by Ferra, the Iron Queen, the one we had, um, rusted, and had spent the past few years as a prisoner in the Iron Court. After Ferra’s demise, Oriana had been promptly rescued, but her health was hanging on by a thread.

“She is convalescing,” Micah said to my relief. If Oriana died, my life would become immensely more complicated. You see, next in line for the metal throne is Micah Silverstrand, the man whose bed I sleep in. And I do not want to be a queen.

Do you have anything specific that you want to say to your readers?
Absolutely – THANK YOU! 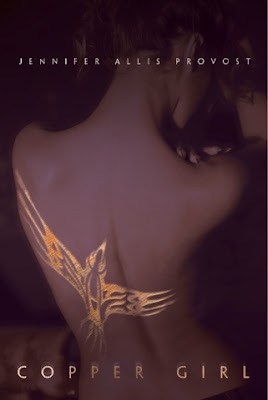 Book Overview: Sara had always been careful.
She never spoke of magic, never associated with those suspected of handling magic, never thought of magic, and never, ever, let anyone see her mark. After all, the last thing she wanted was to end up missing, like her father and brother.
Then, a silver elf pushed his way into Sara’s dream, and her life became anything but ordinary.
Lisa’s Review:  I received this ARC at BEA. I give this book 4 1/2 stars. I love the story! Who can resist a book that has fairies, elementals, a hot elf, and other mythical creatures. (I know I sure can’t.) The characters are phenomenal and the setting was easy to visualize. (I want to live in a silver castle.) Sara and Micah are my favorite characters in this book and they really balance each other well.

GIVEAWAY TIME!!! Thank you Jennifer for the interview.