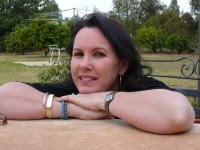 When she’s not submerged in the worlds she creates, Lexxie’s life revolves around her family, a husband who thinks she’s insane, a indoor cat who likes to stalk shadows, and her daughters, who both utterly captured her heart and changed her life forever.

Having no idea how old she really is, Lexxie decided to go with 27 and has been that age for quite some time now. It’s the best of both worlds – old enough to act mature, young enough to be silly.
Lexxie lives by two simple rules – measure your success not by how much money you have, but by how often you laugh, and always try everything at least once. As a consequence, she’s laughed her way through many an eyebrow raising adventure. 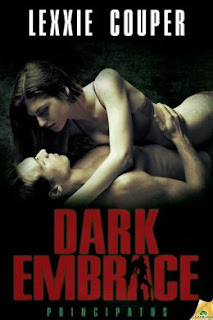 Should she kill him? Seduce him? Or both?
Principatus, Book 2
As an ex-succubus granted her soul by the Highest of Powers, Inari Chayse has spent the twenty years since her “rebirth” channeling her voracious sexual energy into kicking the asses of all malevolent paranormal beings.
Torn between the sex demon she was and the demon assassin she has become, she has no intention of complicating her life further. But when the vampire who pleasures her dreams walks into her paranormal strip club—and takes complete, humiliating command of her body—complicated doesn’t even begin to cover it.
Fifty years ago, Ezryn Navarr abdicated his trueborn throne to spare his people a bloody destruction. He never expected to find himself in a Sydney strip club, buried in the deliciously sensual body of the very divine assassin he’s been commanded to kill. The bigger surprise? Inari awakens something he thought long dead. His humanity.
As their tormented desires intertwine with a centuries-old battle of blood and power, redemption seems as unobtainable as love. The backlash will rock the entire vampire race, leading to their salvation…or their deaths.
Warning: Herein lie dark lusts, dark deeds, dark desires, no-holds-barred passion, an ass-kicking succubus and a vampire to make your blood burn…

Sarah’s Review: I love a strong female lead in any book and this one doesn’t disappoint! I love paranormal romance with hot vampires in it.  This won’t be my last Lexxie Couper read!

Some of Lexxie’s other books…
Amazon.com Widgets

Interview with Lexxie
Out
of all the books you have written, which one is your favorite?

Oh
this is always such a tricky question. Ummm…ummm…don’t tell the other books,
but I’m going to say Dark Destiny.
It was originally released as Death, the
Vamp and his Brother in 2009 but was given a makeover only this year. Why
is it my favorite? Because I think it’s a perfect mix of my quirky sense of
humor, twisted darkness and love of all things paranormal. And it allowed me
to share with the reading world a vampire who surfs and eats Vegemite
sandwiches. And seriously, the world needs
a vampire like that. Honestly.

What
genre is your favorite to write?

This
depends very much on my state of mind. And my mind never listens to me when I
try to tell it what state it should be in, so I’m never sure what genre I’ll be
writing until my fingers start moving. My muse doesn’t help either, the bloody
bastard. He just wants to look at pictures of Chris Hemsworth all day. I’ve
written sci-fi, horror, contemporary, GLBT and paranormal. I love writing each
one equally. I think my mind is very much influenced by how much chocolate I
eat every day. I’m starting to notice a pattern: no chocolate, I work on my
horror manuscript. Lots of chocolate, it’s the contemporary rom-coms. Yeah, I
have no real control over what’s going on.

BTW,
did you know Chris Hemsworth has appeared in a horror movie (Cabin in the
Woods), sci-fi (Star Trek), paranormal (Thor, The Avengers, Snow White and the
Huntsman), and a contemporary (Rush). All my muse needs is for him to star in a
m/m film and life will be perfect J
Do
you have a play list for your books?  If
so can you tell me a couple of songs.
Definitely.
The playlist for Love’s Rhythm
included lots of Bon Jovi and Train (‘Always’ by Bon Jovi is one of my all-time
fav songs). The playlist for my current WIP, Lead Me On features ‘Some Nights’ by Fun. ‘Everybody Talks’ by Neon
Trees, ‘Little Talks’ by Of Monsters and Men and Olly Murs’ ‘Troublemaker’ J And when I write sex scenes, I’m writing them to Adele. Adele has the best
music to write sex to. Honest.

What
was the first book/story you wrote?
The
very first one was a story about a young girl and her pet dragon. The dragon
was called Sandy (the girl was nameless. I’m sure there’s a significance to
that) and was abducted by “bad men”. The girl rescued her pet dragon and let
the dragon “incinerate” the bad men. My dad still has that story and he brings
it out every time I go home to visit. J I was six when I wrote it and worked on it every night after dinner for a
week. It finished up being two pages long and I illustrated it when I was done.
I remember the absolute rush and euphoric joy of writing the words every night.
I loved it. (Still do.)
If
you could have lunch with any author (past or present) who would it be?
Ohhhh,
can I have two? Please? I’m going with Stephen King and William Shakespeare. I
wanted to be the Australian version of King when I was a teenager and what
writer wouldn’t want to meet
Shakespeare (in my mind he looks like Colin Firth). I would bring the Tim Tams
and the coffee and we would do Tim Tam Slams together and talk about the best
way to kill off characters J

What
book are you reading right now?
The Best Man by Kristan Higgens. LOVE
IT! Oh man, I so wish I could write like her. It’s funny, poignant, intriguing
and the characters are so real! Brilliant brilliant brilliant stuff!
What
do you do in your spare time?
LMAO
What’s this spare time you speak of? J Okay, I do make time to engage
in my geekness occasionally. And by geekness I mean, I watch Doctor Who with my family. My girls are
already HUGE Whovians (they are only 5 and 9 yrs old) and we take great delight
in discussing the actions of the Doctor and his companions and how clever the
Doctor was and what secrets may be hidden in each episode. (Then there’s my
muse’s preoccupation with Chris Hemsworth, but I tell myself that’s research
time, not spare time time J )
Do
you read in the bathtub?

I do.
Though not as often as I’d like (whenever I try to get in the tub I’m joined by
two giggling girls which isn’t productive to reading). My current tub reading
book is Dean Kontz’s Intensity.
Reading a scary book in the bath is a clever move…unless you’re reading
something like Jaws, I guess J
Favorite
place to travel?
Anywhere
beyond my front door. But if I had to pick one place, I’d say Australia. This
country is so big I could spend the rest of my life exploring it and only see a
small part of it.
Can you tell us what you
are working on right now?
Right
now I’m about to type The End on Lead Me
On, the fifth book in the Heart of
Fame series. It’s about Samuel Gibson, the lead guitarist for Nick
Blackthorne’s band (we met Nick in Love’s
Rhythm) and his relationship with a prickly paramedic who can’t stand rock
musicians. It is, I think, one of the best books I’ve written.

Anything
else we should know about you?
I
dated the inspiration for the film, Strictly
Ballroom for three years J I kid you not. (And I can’t dance to save myself. Hee hee hee)

Thank you Lexxie for the ebooks for this giveaway!


TWO Winners will get to pick an ebook from Lexxie’s Backlist.
a Rafflecopter giveaway
Tweet