An Absence of Light by Meradeth Houston
Published by: Evernight Teen
Publication date: October 31st 2014
Genres: Horror, Science Fiction, Young Adult
Synopsis:
Leah’s always seen the shadow creatures. She thought she was immune to their evil—until now.
She’s walked into a massacre, stolen a BMW, and is running from the law for a crime she didn’t commit. Nineteen-year-old Leah’s life just went from mildly abnormal to totally crazy at lightning speed. But no one will believe that the shadow creatures are framing her for the murder, because she’s the only one that can see them. At least that’s what she thought.
When Leah stumbled across a group who share her ability, she discovers they have something she doesn’t: a way to fight back. When the group offers to teach her how to kill the shadow creatures, Leah jumps at the chance. But something is brewing with the creatures. They’re tracking down the hunters like there’s no tomorrow. Leah suspects that maybe there won’t be, and it’s up to her to make sure tomorrow comes. Because she’ll do anything to stop the shadows, including risking her life—and the life of the one she loves—to keep the world from being lost to darkness forever.

Purchase:    Amazon    |    Barnes & Noble
Lisa’s Review: I received a copy of this book from the author for an honest review.
I have always liked a good paranormal read and this one is just that.
Leah’s family was murdered by a creature from another planet. Leah flees the scene and ends up traveling to a town where she meets others that are aware of these creatures. The group then plans to get rid of the creatures.
Leah was definitely my favorite character in this book. She is courageous and determined. I liked how she pushed herself through her fears. My next favorite character was Manuel, he has that Obi-Wan Kenobi persona. I wish there would have been more about Adam. I wasn’t able to get a feel for that character.
This book is well paced and captured me immediately. The events that occur in the first chapter make you want to know how it all ends and why it was occurring. What an awesome way to start a book. 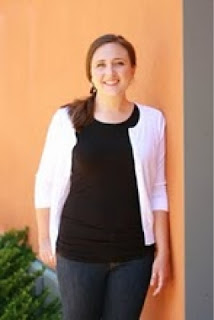 Meradeth’s never been a big fan of talking about herself, but if you really want to know, here are some random tidbits about her:
>She’s a Northern California girl. And now is braving the cold winters in Montana.
>When she’s not writing, she’s sequencing dead people’s DNA. For fun!
>She’s also an anthropology professor and loves getting people interested in studying humans.
>If she could have a super-power, it would totally be flying. Which is a little strange, because she’s terrified of heights.
Author links:    Website    |    Facebook    |    Twitter    |    Goodreads
**Check out the blog tour schedule and follow along the tour.**
Giveaway!
-One (1) ebook copy of any one book by Meradeth Houston.
-Open internationally.

3 responses to “Blog Tour: An Absence of Light by Meradeth Houston”