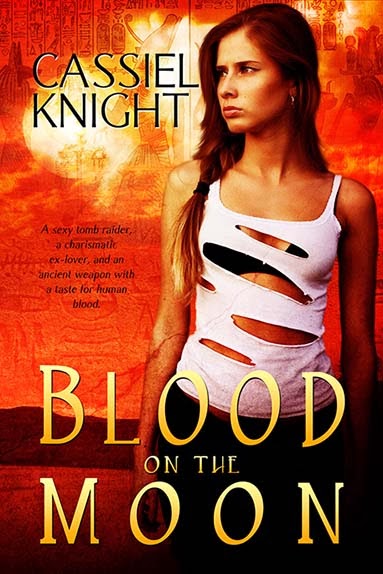 Title: Blood on the Moon

Synopsis:
Mia Langdon—tomb raider and adventure-seeker—has everything
she wants. Freedom. Independence. No chains (a.k.a. a man). Her troubles begin
when she’s attacked on a dig in Peru. Soon, she’s forced to use her tomb
raiding talents to find the flaming arrows of an Egyptian goddess. In the wrong
hands, this weapon could destroy the human race—and nearly had.

Used to doing things her own way, it isn’t long before she figures out that she
needs the help of Harrison Braden Stanton, her stuffy, but so yummy,
Egyptologist and ex-lover. There’s one problem. He despises what she does. As
Mia and Harrison find themselves in the middle of a battle between the Egyptian
gods and goddess, there’s no choice for the woman with a Grand Canyon-sized
independence streak and the man working for the Egyptian god, Osiris, but to
work together to prevent the destruction of all they love. 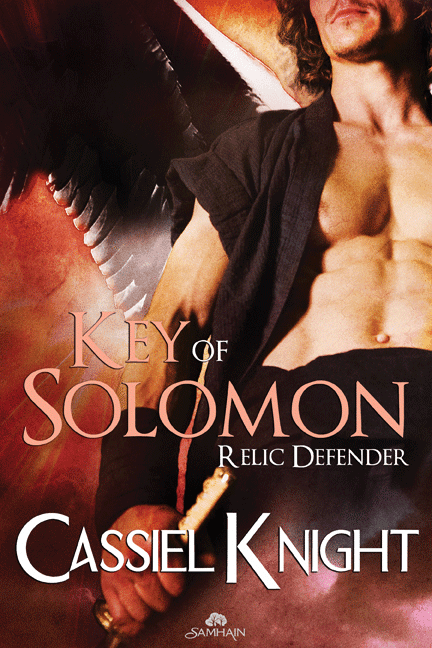 Something is different about tonight. A man whose silver gaze seems to touch
her skin beneath her veils. When a rowdy customer crosses the line, he comes to
her rescue with the speed of a falcon—complete with wings.

Mikos Tyomni has never seen anyone dance the raqs sharqi like Lexi. Trust his
tormentor, Archangel Michael, to put him in close contact with the cause of his
downfall: a mortal woman. Particularly this mortal woman. The Defender. He has
only thirty days to win her trust before Hell’s deadliest demons attempt the
mother of all prison breaks.

No matter how sexy the messenger is, Lexi’s career plans don’t include some
crazy idea that she’s the last line of defense against the forces of evil.
Until her university mentor’s murder leaves her holding the key to Hell. And
fighting a losing battle against a passion with the unholy power to bring down
Heaven…

Excerpt from Blood on the
Moon by Cassiel Knight:
Harrison sighed and leaned back in
the chair. He stretched one arm over the back of Eleanor’s chair. She turned
and smiled at him, lavender eyes sparkling nearly as much as the diamonds she
wore at her neck and in the delicate pink lobes of her ears. He smiled back and
she returned to telling their tablemates a story about her last trip to France.
His girlfriend was in rare
form tonight, bubbling and officious and impeccably attired in a blue dress the
color of Egyptian lapis lazuli hugging every curve and swell of her body. Pure
feminine delight, a feast for the eyes.
He sighed again. For some
reason, the banquet set before him left him full. After nine months of dating
exclusively, he knew Eleanor expected him to pop the question, as the Yanks
would say. A week ago, he considered doing just that. But now, a sense of
restlessness and anticipation left his feet tapping and not from a desire to
dance.
His gaze swept the crowd
again. Where was Sophie? He hadn’t seen her since she and Sebastian left to see
the tomb mock up. His niece hadn’t wanted to wait until his duties as
exhibition curator were discharged before going off and exploring. Fortunately,
his friend surprised him with a visit and now ran watch over Sophie.
Harrison rubbed his chin, feeling the
slight scrape of his morning shave wearing off. Time for him to go find his
wayward, high-spirited niece. The last thing he needed was for her to find her
way into a part of the museum she wasn’t supposed to be. And it wasn’t like his
best friend from childhood would be any sort of detriment. In fact, Sebastian
was just as likely to lead the way.
As if towed toward her by a
fishing line, his gaze found and locked onto a tall woman in a sleek gown of
scarlet. It wasn’t just the color that got his attention, or made his mouth
suddenly dry. It was the long, naked line of her spine revealed by the
nearly backless dress, a smooth expanse of flawless skin that begged to be
touched. To be caressed. To run his lips along the indentation of her spine.
Unlike most of the other
women with hair pulled into tight knots, the exotic woman’s black hair fell in
a loose braid down to the middle of her back. Some hair escaped, defying any
attempts at control.
She carried herself
confidently, her strides smooth and slinky as if she were aware of the
appreciative gazes following her every move. Pure animal sexuality screamed
from every bump and swivel of her hips. Harrison
clenched his jaw. Fingers gripped the back of the chair as he fought the urge
to adjust the tightness in his crotch.
Holy hell.
The woman’s whose body
language fairly shouted take me now turned her head and looked him
straight in the eye. God almighty. The full lines of her lips curved
into a mischievous smile. Familiar tawny eyes glowed with humor.
Mia.
He should have bloody well
known. Indeed, the most primitive part of him had known. Scarlet dress, red,
the color of warning. The color of danger. Everything Mia Langdon was.
Dangerously exotic, dangerously sensual.
The only woman who had the
power to take his breath away. The woman who he once thought would be at his
side for the rest of his life. Until he discovered, unlike the perfect
relationships in romance novels, love did not conquer all. It failed to conquer
the insurmountable, deep within their soul, differences each had about their
passions. The passion for history. While he worked to protect the past for the
future; Mia salvaged the past’s treasures for the glory. For the excitement.
For the money. That he could not get past.
Hovering at the beautiful
woman’s side was the sun-kissed sable waves of his recalcitrant niece. And just
a little further away, a tall man with dark hair. Bloody hell. Sebastian. Harrison’s stomach twisted. The only way this situation
could get worse is if—
“Harrison!” 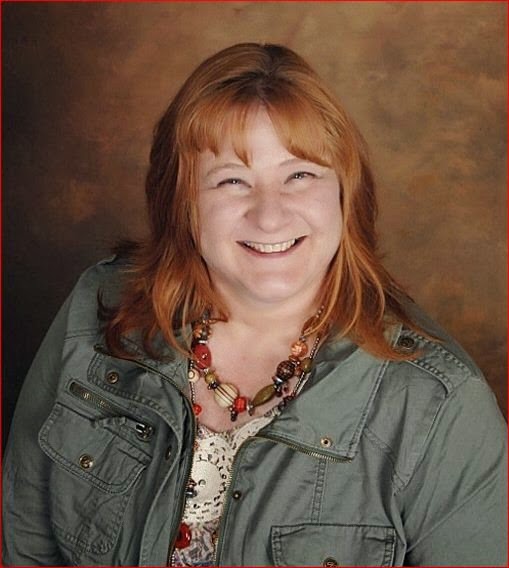 About the author:
In
the job that pays the mortgage and allows her to indulge in her real
passion, writing, Cassiel Knight works in the beautiful state of
Oregon. Crazy-passionate about the romance writing industry, Cassiel has a
paranormal romance series featuring fallen angels and demons from Samhain
Publishing, an urban fantasy through Lyrical Press and a Egyptian
mythology/archeology series with Champagne Book Group. She writes paranormal
romances with kick-assitude that blend archeology and mythology – just a few of
her favorite things.
Amazon
Author Page | Facebook
| Twitter | GoodReads | Website | Blog
Giveaway Details:
There is an International tour wide giveaway. Prizes include
the following: