H.A.L.F. 9 has taken his first breath of desert air and his first steps in the human world. Created to be a weapon, he proved too powerful for his makers and has lived a sedated life hidden from humans. But H.A.L.F. 9 has escaped the underground lab he called home, and the sedation has worn off. He has never been more alive. More powerful. Or more deadly.

Erika Holt longs to ride her motorcycle east until pavement meets shore. She bides her time until graduation when she’ll say adios to the trailer she shares with her alcoholic mother and memories of her dead father. But a typical night in the desert with friends thrusts Erika into a situation more dangerous than she ever imagined.

Circumstances push the two together, and each must make a fateful choice. Will Erika help H.A.L.F. 9 despite her “don’t get involved” rule? And will H.A.L.F. 9 let Erika live even though he was trained to kill?

The two may need to forget their rules and training and if either is to survive the dangers of the deep beneath them.

H.A.L.F. 9 took his first ever inhalation of desert air. The arid breath filled his lungs and burned. He had become accustomed to the dank, humid recycled air of A.H.D.N.A.’s underground lab. A chill ran through him, but it was not from the coolness of the night. His senses, dulled by the humid conditions he had been kept in, were coming fully alive for the first time in his seventeen years.
Though capable of emotion, he had lived a sedated life and had not experienced the full gamut of feelings one typically experiences by their late teen years. He had learned to strain his facial muscles into a smile when he knew a smile was expected. But the smile that came to his face now was natural and easy, not forced. He was overcome with the joy of the freedom he had longed for all his life.
He was alone and nearly naked save for the A.H.D.N.A. standard-issue light blue cotton elastic-waistband pants and rubber flip-flops. The night was young but already dark. Only a few stars dotted the inky sky. But the darkness was no matter for him. His large eyes allowed him to see clearly without light.
H.A.L.F. 9 stretched his arms over his head, bent and touched his toes, then ran. He didn’t care that rocks poked his tender feet through the thin rubber of his flip-flops, or that desert shrubs scratched his legs. He knew only that he was compelled to put distance between himself and the abandoned mine shaft from whence he came. Commander Sturgis probably already knew he was missing. They would soon come for him.
With each step, the cobwebs cleared from his mind. He could practically feel the synapses firing, alive with electricity.
He had never had the chance to truly run. He did not count the time on the treadmill, electrodes pressed to his body, a computer recording his every breath and heartbeat. He widened his stride and ran faster than he had ever run before. In the dry air, he was quick. He moved more swiftly than a mere human. Faster than he had known he could.
H.A.L.F. 9 tripped over his flimsy shoes and fell to the hard, sunbaked ground. He skinned his hand and laughed out loud as he picked a pebble out of his broken skin. The sound of his laugh in the otherwise quiet, still night startled him. He had never heard himself laugh before because he had not had occasion to make such a sound. He laughed again and thrilled at the robust sound his voice made in the dry air.
Blood the color of an eggplant oozed from the slice in his palm. He had been poked with needles and had his blood siphoned out so many times that he had become numb to the process. But this was different.   The pain thrilled him. He could heal the wound if he wanted to, but he did not. I will let it bleed and scab over. I will have my first scar. 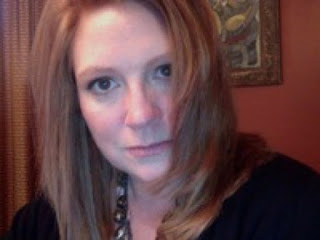 Natalie is the author of H.A.L.F., a young adult science fiction series, and The Akasha Chronicles, a young adult fantasy trilogy. She lives in the high desert of Tucson, Arizona with her husband, tween daughter, and two young cats.Natalie spends her time writing, reading, gaming, geeking out over nerd culture and cool science, hanging out on social media, and meeting readers and fans at festivals and comic cons throughout the western United States. She likes to walk in the desert, snorkel in warm waters, travel, and share excellent food and conversation with awesome people. She was raised an Ohio farm girl, lives in the desert Southwest, and dreams of living in a big city high rise
Author links:  Website   |   Facebook   |   Twitter   |   Goodreads
***Check out the blog tour schedule and follow along the tour.***
***There are TWO giveaways below.***
GWB Giveaway.
-One (1) ebook copy of Emily’s House (the author’s first series).
-Open internationally.

2 responses to “Blog Tour: Deep Beneath (H.A.L.F) by Natalie Wright”