Some secrets should never be kept…


Growing up in the servants’ quarters at Haven Hill, Claire Brown was a poor outcast, living in a world of money and privilege. Her only solace was best friend, Alice Sinclair, and secret desire, Jackson Montgomery. Rich and connected, they were perfect in every way and perfect for each other.


Still, Claire was foolish enough to fall in love with Jackson, and desperate enough to hide it. When Alice found out, there was a terrible accident that left her in a coma. Jackson disappeared, leaving New Haven without even saying good-bye.


Ten years later, Claire has managed to build a life without them. So when Jackson calls out of nowhere to say Alice is awake, Claire’s first thought is Thank God. Her second? I’m screwed. Lusting after Jackson destroyed her. It’s nothing compared to what she’s hiding now.


But nothing stays hidden forever.


Reawakened Secrets is part one of Jackson and Claire’s story.


Part 2, Reawakened Sins and Part 3, Reawakened Seduction will be released early next year.  To be the first to get information on deals, teasers, excerpts, bonus scenes and release dates, connect with the author on Facebook, Twitter, or Goodreads.

I knew it was just a matter of time before he showed up in person, but I was still unprepared when it finally happened. Over a week had gone by with the ceaseless onslaught of gifts. Nonetheless, I went to work and to see Alice every day without getting even a glimpse of Jackson. I was surprised to learn Alice hadn’t heard fromhim either. Then, just like that, he was there.
Jackson sat in the cafeteria, completely engrossed in his smart phone. A small smile graced his lips just as I walked through the door. I screeched to a halt, like my heart that stopped beating before trying to leap out of my chest. Adam, who was right behind me, almost knocked me over.   He gave me a pointed look and whispered, “Big girl panties” in my ear.
Jackson looked up and waved us over to his table. “Hello, Claire.   How’ve you been?” I could tell he enjoyed my inability to piece together a coherent response due to the smirk on his face. “Keeping busy, I see,” he continued, staring at Adam. “Would you and your friend like to join me for lunch?”
I gritted my teeth, going from scared to pissed in three seconds flat. These games had to stop before   I let myself get caught up in something that was never going to happen.
“We need to talk, right now. Let’s go.”
Because everyone was staring – either whispering speculatively or confirming appreciatively that he was my secret admirer – I couldn’t get out of the cafeteria fast enough. I didn’t even take time to say goodbye to Adam. Instead, I walked through the door to the nearest stairwell. I tugged nervously on my scrubs as I waited for him to follow me.
“Jackson, what the hell do you think you’re doing?”
Brows drawn together, he smirked down at me. “Apologizing… you know, most women who receive flowers and gifts wouldn’t have to ask.”
“Most women don’t know you as well as I do. Besides, apologies are usually made in person, and the person apologizing is always after something.”
“Good point,” he said with a laugh.
His arms hung loosely at his sides. He was fighting against the smile transforming his face, but he couldn’t have been trying too hard.   While I was a nervous wreck, he seemed at ease leaning against the wall. He looked… happy. Could he be more of a jackass?
“I’ve missed you, Claire. I know you’ve missed me too.”
“Absolutely not!”
“Then why are you so angry?” he asked smugly. 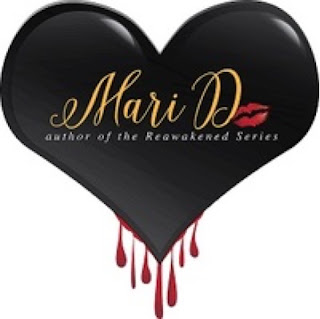 My name is Mari Denae

I am a married mother of three and publishing my first novel is a dream come true. As the nerd that went to bed with a flash light to read the books I swiped from my mom’s room, I have always been an avid book lover. My favorites are hot, alpha male heroes (think Kristen Ashley), suspenseful, romantic thrillers (think Sandra Brown) and poignant, sweet love stories (think Abbi Glines or Colleen Hoover). My plan was always to be a writer of some sort, but somehow real life responsibilities got in the way. Now, I am an accountant with a night time writing obsession.

One Saturday afternoon, I took my girls to see the latest teenage movie. Four days later, I had read all four Twilight books. I was inspired by the innocent romance and ‘Edward Cullen’ (don’t judge). Once I found my way to Fifty Shades of Grey, I was a complete goner. All my spare time was spent reading, writing or blogging. After version one million, five hundred and fifty five of my series Reawakened , I’m finally ready to share it and hope that someone enjoys reading the story as much as I have enjoyed writing it. This one’s for my mother. I hope she’s looking down proud because I finally finished what I started.