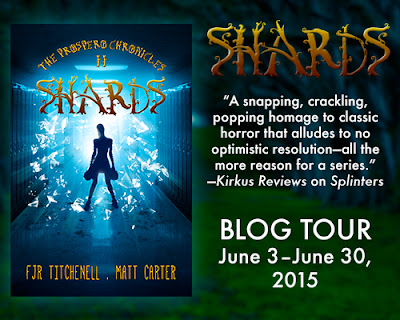 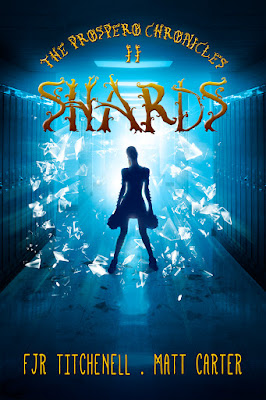 Synopsis:
With a strong Lovecraftian bent, this is the continuing saga of ordinary human resistors who must sacrifice their normal lives in favor of fighting for all humankind

When autumn descends on Prospero, California, Ben Pastor hopes that the normality of the new school year may offer a reprieve from the town’s recent paranormal horrors. Mina Todd, however, knows all too well that there are no reprieves and no normality in this town, especially after she starts having crippling, unexplained hallucinations of the dead. But even she can’t prepare for what the coming year holds. On top of a brewing civil war that threatens all of humanity, inside the walls of Prospero High, Ben, Mina and their expanding network face a sinister campaign that aims to destroy their friendship, a newly human Haley Perkin struggling to readjust to life, and an assassin of untold power who is picking off human rebels. Ben and Mina’s one hope may rest with a mysterious figure hiding in the woods outside of town; a living legend who may know how to stop this dangerous new breed of supernatural foe. That is, assuming the figure doesn’t first kill everyone himself.

Purchase Links:   Amazon   |   Barnes & Noble
Lisa’s Review:  I received a copy of this book from the publisher for an honest review.
I love being able to see from both Mina’s and Ben’s perspective. The alternating chapters from each of these POV’s is awesome. Mina and Ben are very well developed characters.

Mina really breaks out of her shell in this book and shows some true leadership skills. You can tell she still needs more confidence but she is pushing herself in the right direction. She continues to be this strong, courageous, independent character which I admire a lot.

I felt so bad for Ben. He had so much happening to him in this book but he persevered. When others probably would have taken the easy route and remained loyal and did the right thing.

I love that there was more of Aldo in this book. I’ve liked his character since the first book and so being able to see more of him was awesome.

The action scenes were written in a way which made it easy to visualize what was occurring. Especially the last scene in the school.

I can’t wait for the next book.

Guest Post:  New faces to
look out for in Shards
Ben and Mina have met a number of
people, some human, some not, in the course of their adventures in Prospero,
and though at the moment their core group only consists of them, Aldo, Haley
and Kevin, the new school year will bring a new influx of people into their
lives. Some of them may prove allies, some enemies. Some may prove human, some
not. Either way, let us introduce you to some of the people they’ll meet in Shards who will play their parts, good
or bad, in the coming year.
Courtney Haddad

What’s up with her lately: She seems
to be the target of some unusually brazen Splinter attacks. These could be a
trick to win her The Network’s sympathy and confidence. Or she may simply be
the first victim of changing Splinter tactics.

Interests: Each other, mainly.
Julie’s also a star student with a particular fondness for History and unusual
fashion, while Greg favors conspiracy theories and breaking into cars.

What’s up with
them lately: They’re
back from a summer trip out of Prospero and not altogether thrilled with the
changes to the Network’s lineup in their absence. They’re long-standing
members, but can the other rebel humans really trust anyone who drops off the
map so often, when the Splinters need only a few hours to replace a new victim?
Madison Holland
Age: 16
Interests: Cheerleading.
Friends. Boys. The ins and outs of the social order of Prospero High.
What’s up with
her lately: As
always, Madison holds a spot near the top of the Prospero High food chain and
isn’t all that interested in giving it up. Like many a girl at school she has
her eyes on new kid in town, Ben, but is her interest purely romantic, or might
there be something more sinister?
Mr. Finn
Age: 50’sish (he’s a
teacher, it’s hard to tell)
Interests: Carpentry.
Military history. Handcrafting medieval weaponry.
What’s up with
him lately: Despite
always having been something of an outcast in Prospero, Mr. Finn has no
complaints. He loves his job, loves sculpting young minds, and loves that he’s
never had to 100% grow up. Of course, given Prospero’s population of immortals
who’ve never really grown up, he may blend in more than he lets on.
Patrick Keamy
Age: 16
Interests: Girls. Parties.
Working out. Maintaining order. Classic movies. Girls.
What’s up with
him lately: Once
upon a time, Patrick may have been a bully, but he’s gotten a lot better, he
swears! Now he just loves living the high life of being a rich, good-looking
kid in a small town, rubbing elbows with the best and being one of the people
to determine the school’s social order. Of course, if you cross him, you’ll
find the darkness that hides behind his charm, and that his muscles aren’t just
for show.

What’s up with
him lately:
Sudden habit of saying multiple words at a time to Mina Todd. Either his tastes
have suddenly broadened, or someone’s putting him up to it. Who and why are
another question. 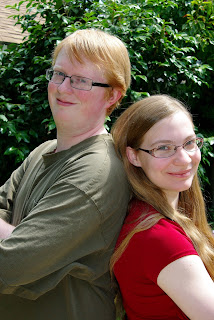 About the Authors:   F.J.R TITCHENELL and MATT CARTER
met and fell in love in a musical theatre class at
Pasadena City College and have been inseparable
ever since. Though they have both
dreamed of being writers from a very young
age, they both truly hit their stride after they
met, bouncing ideas off of one another, forcing
each other to strive to be better writers, and
mingling Matt’s lifelong love of monsters with
Fiona’s equally disturbing inability to let go of
high school. Titchenell and Carter live in San
Gabriel, California.
Author Links:
Facebook:  FJR Titchenell, Matt Carter
Twitter:   FJR Titchenell, Matt Carter
Blog:   FJR Titchenell,  Matt Carter
Giveaway!