Juvenile Fiction / Horror & Ghost  Stories
350 pages
Release Date: September 23, 2014
Synopsis:
Under ordinary circumstances, Ben and Mina would never have had reason to speak to each other; he’s an easy-going people person with a healthy skepticism about the paranormal, and she’s a dangerously obsessive monster-hunter with a crippling fear of betrayal. But the small town of Prospero, California, has no ordinary circumstances to offer. In order to uncover a plot set by the seemingly innocent but definitely shapeshifting monsters-that-look-like-friends-family-and-neighbors, the two stark opposites must both find ways to put aside their differences and learn to trust each other.
Lisa’s Review:  I received a copy of this book from the publisher for an honest review.
I gave this book 4 1/2 stars. This book is reminiscent of one of my favorite classic movies, Invasion Of The Body Snatchers, which is what peaked my interest to want to read it. I really liked the characters. Mina is so determined and courageous. Ben is loyal and caring. They both seem to balance each other a lot. I wish there was more from Aldo. The twist at the end was totally unexpected. I totally didn’t see that bit coming at all. The book was paced well and kept my attention throughout. I loved reading in both Mina and Ben’s POV. I can’t wait to read the next book.

Purchase Links:   Amazon   |   Barnes & Noble
Guest Post by F.J.R TITCHENELL
Is Mina Todd a Feminist Role Model?
Mina Todd doesn’t particularly care whether she qualifies as a feminist role model. Being a believer in justice, she would care, if she lived in a world that wasn’t being invaded and violated by interdemensional shapeshifters, but she only has room in her life for one all-consuming crusade. She doesn’t care about gender, race, age, nationality or religion. She doesn’t even care about prejudice, unless it gets in her way. All the justice she can focus on is human vs. Splinter. All our little intraspecies injustices are for someone else to worry about.
I, on the other hand, do live in a world free of Splinters (as far as I know), and little things like acknowledging the equal humanity of half the planet’s population do matter to me, a lot. So when I was offered the chance to choose my topic for this tour spot, I knew I had to talk about Mina from a feminist (or, my more accurate term for the belief in gender equality, antisexist) perspective. It was going to come up sooner or later.
Stories reflect the way we see the world. They also affect the way we see it. If you can remember how you idolized and modeled yourself after your fictional childhood heroes, you know how much.
The way female characters have historically been treated by storytellers goes hand-in-hand with beliefs about what a woman should be, which in most cases meant a passive object, whatever male characters need her to be for their stories to work.
Our ideas about what a woman should be or should want to be have changed, and so have our female characters… kind of.
Female characters are now expected to be tough, confident, independent, take-no-BS types, while at the same time usually being jammed into the same old plot formulas that continue to cast them as damsels in distress.
It doesn’t work, and people are starting to notice that all this gives us is more bland, disingenuous, forgettable female characters in even more contrived-feeling stories, but the reaction to this seems to be for people to throw up their hands in despair and decide there’s no way to write female characters well enough. We’ve made them helpless, and we’ve made them armed and violent. What else is there?
Ahem.
Well, how are male characters written that allows them to be believable, memorable and fascinating?
The answer is that they’re not constantly written to prescribe what a man should be, certainly not what he should be relative to women, what his role should be in her world. They’re not written to be role models, at least not exclusively.
Real, developed, fleshed-out, interesting characters, who remain male the vast majority of the time, often represent the best of humanity, yes, what audiences wish we could be, but they also represent our worst sides, our challenges and weaknesses and complications. That’s what stories and their characters are supposed to be for, to explore what it is to be human.
So, back to the topic, is Mina a feminist role model? Is she a good role model for girls? For anyone?
In some ways, she’s certainly admirable. She’s principled, determined, and smart. She takes action and takes responsibility for herself. Her life doesn’t revolve around money, gossip and appearances.
In other ways, absolutely not! She’s also dismissive, insensitive, neurotic, and simmering with rage that she doesn’t have nearly as controlled as she thinks. She’s not the girl you want your kids hanging around if you want to keep them happy, alive and out of jail.
So no, she’s not a perfect role model.
And that’s part of what makes her an antisexist character.
Because girls and women deserve more than good role models in our fictional counterparts. We deserve more than being told precisely what to be. We are not a single type of character to be perfected. We are every type of character, every part of the human experience, just like men. We are whole people, and we deserve to explore our imperfect humanity without limitation.
That’s the kind of equality I want to see in fiction, and the kind I mean to create.
About the Authors 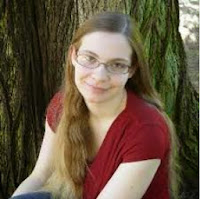 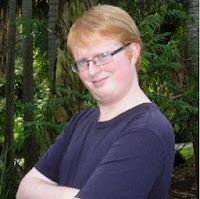 F.J.R TITCHENELL and MATT CARTER met and fell in love in a musical theatre class at Pasadena City College and have been inseparable ever since. Though they have both dreamed of being writers from a very young age, they both truly hit their stride after they met, bouncing ideas off of one another, forcing each other to strive to be better writers, and mingling Matt’s lifelong love of monsters with Fiona’s equally disturbing inability to let go of high school. They were married in 2011 in a ceremony that involved kilts, Star Wars music, and a cake topped by figurines of them fighting a zombified wedding party.