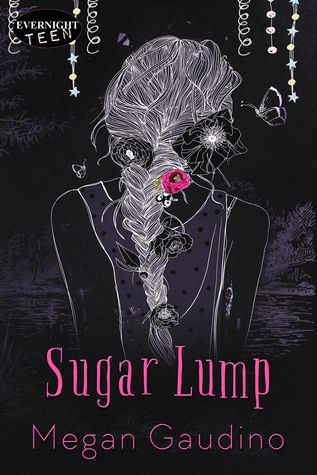 Seventeen-year-old travel blogger CC is stuck on a never-ending road trip with her wanderlust-addicted father. When her dad lands the job of his dreams in Sugar Lump—wedding capital of the world—CC finally finds a place to call home. Complete with two quirky best friends and a quixotic guy to crush on, Sugar Lump is more shades of perfect than she can possibly count.

But when CC accidentally overhears the mayor complaining that she has to “take out” a rogue employee for not fulfilling the terms of his contract, the idyllic town’s facade crumbles. Devastated by the possibility of having to move yet again, CC discovers everyone has been keeping a massive secret from her—including her own father.

Cheesy scrambled eggs and buttered toast waited for me on a paper plate because we hadn’t gone shopping yet. It was something I could’ve gotten used to. I sat on the gold-topped bar stool, my curls tamed as much as they could be thanks to a large amount of product, sipping iced vanilla coffee from a glass bottle. I decided to wear my new black and white sweater with an old pair of jeans and wrestled with that decision while scanning the mostly empty living room. Except for all of Dad’s plants, it didn’t look like people lived here. If staying was the long term plan, we’d probably have to unpack—set up a home.

“You look perfect, Cupcake.” Dad stood across from me, drinking from a mug he brought home from the bakery and finishing up his own breakfast.

“Thank you. The shirt is courtesy of you.”

“Ah.” He set the mug back on the counter. “I have impeccable taste in women’s clothing.”

“Don’t go bragging about that. This boutique-only shopping is really going to add up.”

“We could afford it.”

The way he ended his sentence led me to believe he had more to say but was saving it for later. Maybe never.

“We could? If what?” I finished my coffee, and before I could even set the bottle back down, Dad took it from my hands and put it in the sink.

“We should get going.” He looked at his wrist, despite the fact that there wasn’t a watch, and cleared the rest of breakfast by throwing the paper and plastic away.

“Are you making more than you thought you would be?” And if so, why keep it a secret?

“Well.” He scratched the dark stubble on his chin, and I thought I saw a gray hair. “That depends.”

kitchen. He tried to make his way to the door, but I took up most of the

space in the narrow kitchen.

“Like…” He turned, like he was going back to the sink, then pivoted around at the last second and got past my side. “If you want to spend your summers walking dogs and shelving ancient dusty books ever again.”

He made it clear from the way he was backing to the door he wanted to leave so I walked back around the counter and sat on my stool. “I liked shelving dusty ancient books. But I’ll never walk another dog for as long as I live. What’s that have to do with you though? Don’t I need to earn my own money?”

“No.” He cleared his throat. “Yes. It’s nothing. Really. Nothing. I’m just still trying to figure things out, Cupcake. Don’t worry ’bout a thing.”

Megan Gaudino works in a high school library by day and on her own books by night. She’s made up of a mixture of black clothing, iced coffee, and a desire to go adventuring. Those things sort of come together naturally to form a writer. She lives in Pittsburgh where you can find her reading, writing, and Instagraming.

One response to “Blog Tour: Sugar Lump by Megan Gaudino”