The Vampire, the Hunter, and the Girl by Martin Lastrapes
(The Vampire and the Hunter Trilogy #1)
Publication date: March 18th 2015
Genres: Adult, Horror, Paranormal
Synopsis:

Adam and Jesus (the vampire and the hunter) have an innate antagonism, which is only heightened once they discover they’re competing for the affections of the same girl. Olivia (the girl) is an aspiring author struggling to write a vampire novel. What none of them yet know is there’s a menacing force looming that will change the course of their lives forever. With the first installment of The Vampire and the Hunter Trilogy, Martin Lastrapes has created a vampire tale that is scary, funny, thrilling, and satisfying to the very last drop.

Excerpt
Lastrapes/The Vampire, the Hunter, and the Girl
Prologue

Somewhere beneath the earth, through the dirt and below the sewers, past the roots and beyond the rocks, was an underground palace with tall marble walls and elegant paintings, fireplaces the size of bedrooms and tuxedoed servants who moved swiftly and quietly.  Of the hundreds and thousands of rooms within this palace, there was one particularly big room with walls so high the light turned black before it reached the ceiling.  Like every other room in the palace, it had a fireplace and elegant paintings, but, unlike every other room, it had three chairs lined up side by side at its center, each respectively occupied by the vampire, the hunter, and the girl.
The three of them had burlap sacks over their heads, concealing their vision.  One of the palace’s swift and quiet servants entered the marble room through its exceedingly tall doors, approaching the vampire, the hunter, and the girl, removing the burlap sacks from their heads.  As the trio looked around, trying to figure out where they were, the servant made a swift and quiet exit.  While they could now see their surroundings, they couldn’t move to explore them, as their arms and legs were strapped to their respective chairs.
“What’s going on?” asked the hunter.
“This feels like a dream,” said the girl.
“This is no dream,” said the vampire.
Their voices echoed up the tall marble walls, trailing off somewhere in the darkness.  The tall doors opened again and another tuxedoed servant entered the room with such swift quietude he seemed almost to float as he walked to the fireplace, which was burning logs the size of full-grown trees.  The servant pushed a button on the marble wall beside the fireplace and, in an instant, the fire inside doubled in size, sending a wave of heat through the air.
“Excuse me,” said the girl to the servant, “what’s going on?”
The servant, however, ignored the girl and her question, before exiting the tall marble room.  Once again alone, the vampire, the hunter, and the girl sat silently, each of them equally confused as to where they were and, more importantly, why they were there together.  The tall doors opened once again and a long red rug unrolled towards the trio, stopping at their feet.  A couple dozen tuxedoed servants poured through the open doors, lining up shoulder to shoulder on either side of the red rug.  From the darkness of the open doors, a methodical clicking of heels sounded, growing louder and louder, until a tall, handsome figure appeared in the doorway.  The servants all dropped to one knee, bowing their heads as the handsome figure passed, walking down the long red rug.
This figure—who was, in fact, their captor—wore a dark suit with a red tie.  His black hair was slick and shiny, combed tight over his scalp, displaying a pointed widow’s peak.    His skin was pale, his cheeks sharp.    His lips were rosy and his teeth white, each of them perfectly straight, not a molar out of place.  When the tall, handsome figure reached the end of the rug, four more of his servants entered the marble room with a large throne made of solid gold and red velvet, setting it down behind him.    Without looking back, the handsome figure sat down.  He looked over each of his guests—the vampire, the hunter, and the girl—smiling as he crossed his legs, setting his hands in his lap.  All at once, the servants poured out of the tall marble room, shutting the doors behind them, leaving their master alone with his guests.
“Hello,” he said.  “Welcome to my home.  I am Dracula.” 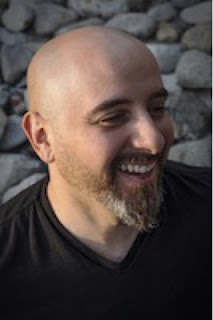 MARTIN LASTRAPES won the GRAND PRIZE at the 2012 PARIS BOOK FESTIVAL for his debut novel INSIDE THE OUTSIDE.He grew up in the Inland Empire, has a Bachelor’s Degree in English and a Master’s Degree in Composition from Cal State San Bernardino, watches his favorite movies over and over again, learned many a lesson from professional wrestling, wonders if he’ll ever be famous enough to be on “Dancing With the Stars,” thinks good stand-up comedy is rare and under appreciated, is scared of Vladimir Putin, wonders if it’s too late to learn how to play the guitar, gets depressed when he hears the theme song from “M*A*S*H,” wonders why Teen Wolf never made it to the NBA, and wants Morgan Freeman to narrate his life.He is also the host of THE MARTIN LASTRAPES SHOW PODCAST HOUR. Subscribe on iTunes or listen on the official website MartinLastrapesShow.com. New episodes every week.
Author links:  Website   |   Facebook   |   Twitter   |   Goodreads
***Check out the blog tour schedule and follow along the tour.***
Giveaway:
Tour-wide giveaway (INTL)
-3 signed copies of The Vampire, the Hunter, and the Girl
-Ends September 10th