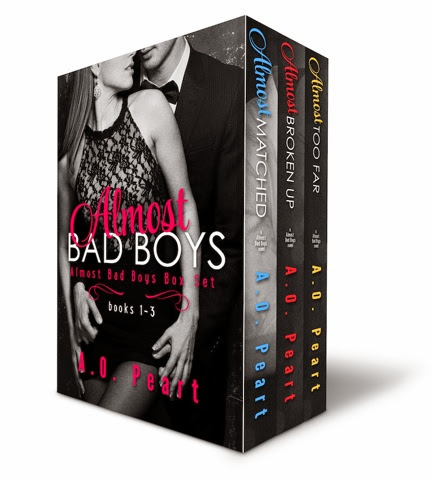 Almost Bad Boys Omnibus  by A.O. Peart
(Almost Bad Boys #1-3)
Publication date: May 24th 2014
Genres: Contemporary, New Adult, Romance
Synopsis:
This Omnibus Edition collects the three Almost Bad Boys books into a single package: Almost Matched, Almost Broken Up, and Almost Too Far.
**
How to describe this hilarious and sexy series in just one sentence?
A martini glass of sizzling romance, a jigger of suspense and crime, perfectly shaken with a twist of wacky humor.
**
By popular demand from my readers, I wrote an additional scene for Almost Matched: COLIN AND NATALIE’S FIRST NIGHT TOGETHER. The bedroom doors are cracked open for you to sneak in and, I don’t know… hide behind the curtain maybe?
This exclusive scene has never been published before and is only included in this Omnibus.
**
~ ALMOST MATCHED: Would you take another shot at love? Or just settle on a friend with benefits?
~ ALMOST BROKEN UP: How far would you go to protect the one you love?
~ ALMOST TOO FAR: Where would you draw the line between love and trust? 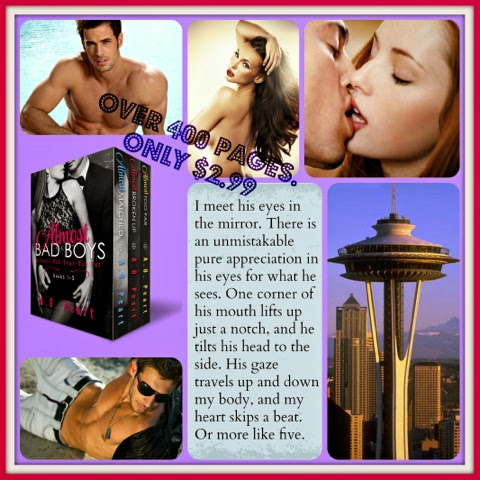 Colin wraps his arm around my waist, and we walk to the bar, where three twenty-something, shirtless, attractive bartenders put on a real performance. Seriously, it should be forbidden to be as hot as these guys are. They are causing something close to a mass hysteria among the females clustered around the bar.
While two of the bartenders wait on the customers, the third one impressively juggles four shot glasses up in the air. He finally puts them down, swiftly jumps on the bar, and falls onto his knees in front of a group of tipsy, screaming girls who still look like teenagers.
He sits back on his heels and grins at the girls. His distressed jeans tightly hug his strong legs, and his muscular, naked torso and well-defined arms make me want to join the wild females. I quickly snatch a glance at Colin, but he doesn’t seem to mind me drooling. Or at least he’s smarter than showing any signs of jealousy over this.
One of the women leans forward and tries to kiss the bartender’s washboard stomach, but he stops her, laughing. Another bartender hands him a bottle of Frangelico and a tiny glass. The guy on the counter makes a production of pouring the liquor into the glass, while slowly and seductively swinging his hips to the music. The women are going wild. By now there is a big crowd of them,trying to squeeze in closer. The bartender chooses one girl, leans forward and whispers something to her. She nods, and opens her mouth. He touches the glass to her lips and pours the Frangelico into her mouth.

Her friends cheer and demand the same treatment. They stick money behind the bartender’s jeans waistband, as if he is a stripper. Well, he acts like one. Soon he collects an impressive amount of bills. I see mostly tens and twenties. He jumps off the bar and switches places with one of his co-workers—a gorgeous African American guy with dreadlocks. The women hoot and clap in delight. 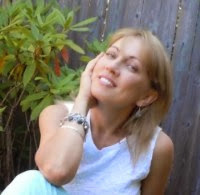 Angela was born and raised in Poland. She now lives in the Seattle area with her family and a chronically curious cat.
She describes herself as European born, American by choice.