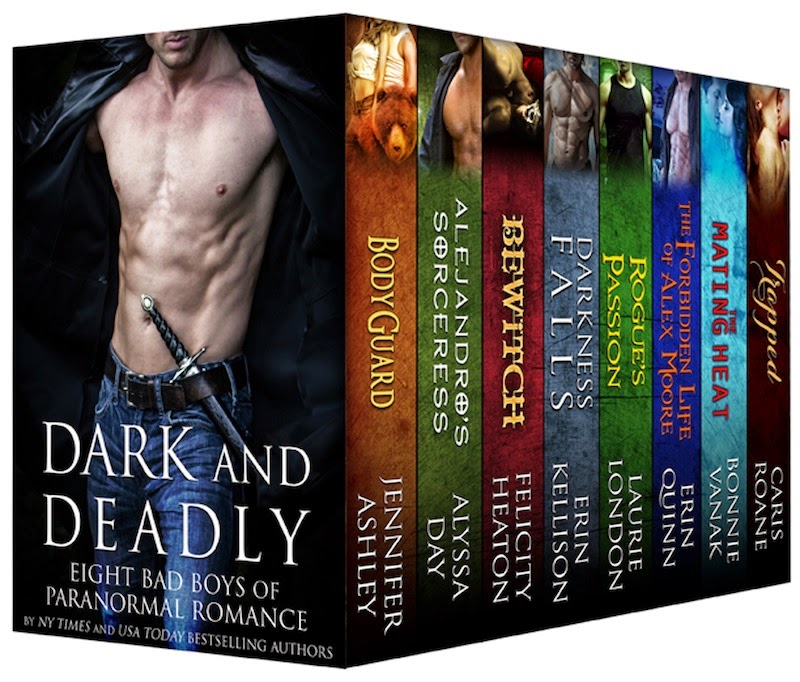 Synopsis:
Eight hot paranormal romances by New York Times and USA Today bestselling authors. Alpha-male bad boys will fulfill your darkest, most deadliest desires in these stories about shifters, werewolves, vampires, magic, special powers and other realms. But only if you dare…
Featuring the bad boy heroes of:
BODYGUARD by Jennifer Ashley
ALEJANDRO’S SORCERESS by Alyssa Day
BEWITCH by Felicity Heaton
DARKNESS FALLS by Erin Kellison
ROGUE’S PASSION by Laurie London
THE FORBIDDEN LIFE OF ALEX MOORE by Erin Quinn
THE MATING HEAT by Bonnie Vanak
TRAPPED by Caris Roane

Alejandro cocked the shotgun they hadn’t been able to force him to give up and followed his teammate into the burnt and jagged opening in the side of the building, hoping that—for once—there weren’t any trolls.
He hated trolls.
“Clear,” Mac, already moving through the narrow hallway, called back to him. It was Mac’s turn to go first. They kept score.
Lately he’d been keeping score on a lot of things. Like time. The year, two weeks, and five days since he’d seen the sunlight outside of the academy, for instance.
Not that he was counting.
Anyway, the year-long course at the FBI’s sister division, P Ops, had kept him plenty busy.
“Shotgun! You coming or scratching your ass back there?”
“No, my friend, I was just thinking of asking your sister to scratch it for me,” Alejandro said. “She reaches all the itchy parts so well.”
“I will kick your ass if you get any of your itchy parts anywhere near my sister. Or she’d kick it for you. Jenny scares even me.”
The sound of Mac’s Glock firing three shots in rapid succession caused Alejandro to break into a run as he slapped his night-vision goggles in place.
“On my way,” he called, not bothering to try to be stealthy. “Save some for me.”
He caught the shifting glimmer of light in the corner of one eye and whirled around, aiming and firing in one smooth motion. Whatever it was, he missed. Too short to be a troll, so there was one mercy. If he were the type to have nightmares, he’d still be having them about the last one’s breath. Green, moss-covered teeth. What the hell was that about? Toothpaste was cheap.
“Shotgun! Could use a little help here!” Mac sounded just the slightest bit out of breath, which was unusual for the man who’d beat the all-time speed record for the FBI’s obstacle course at Quantico in an inter-agency competition. Alejandro had won a hundred bucks on that one.
He took off running, cocking the Remington as he moved. The vampire who jumped him five feet down the hall took a blast to the head. Alejandro vaulted over the vamp’s disintegrating body, not wanting the acidic slime of decomposing vamp on his new shoes.
A high-pitched scream warned him of the approach from overhead of a deadly Mngwa, but he had a silver throwing knife at hand. One lethal toss later, a couple hundred pounds of mutant killer cat lay on the floor, blood gurgling out of its throat.
He skidded to a stop at the end of the corridor, not willing to rush headlong into a blind turn, and Mac called out to him again, his deep voice rough and strained. “Alejandro, if you’re coming, now would be a really good time.”
Alejandro instantly switched from student-taking-his-final-exam mode to deadly-predator mode. They had a code between them, he and Mac. They were only Alejandro and Maxwell to each other in the event of a dire emergency. Whatever faced Mac around that corner was no training-ground obstacle. Somebody had set a trap, and Mac was caught in it.
Alejandro was going to kick somebody’s ass for this one.
Giveaway Time!!!!