Magic and Mayhem in Manhattan

Francesca Bellafiore comes from a nice Jewish family — one that happens to have magical powers. Underneath her good-girl exterior, though, she’s a wannabe badass with dreams of becoming a paranormal detective.

Party boy Rafael Muñoz does everything possible to publicly disappoint his high profile father. Privately, it’s a different story. His carefully crafted bad boy reputation masks the fact he’s a master illusionist, forced into solo covert ops. The role is wearing thin and Rafael longs to be part of a team.

When Francesca and Rafael meet, it’s love at first sight… For about five minutes. Rafael is spectacularly attractive—and, Francesca discovers, fully aware of the fact. Rafael knows from experience that girls like Francesca are more trouble than they’re worth.

So it sucks big time when they’re caught in a web of magic, minions, secrets, and enough sexual tension to power NYC. Their only chance to save the city and survive is to team up, trust each other–and maybe even fall in love.

Provided they don’t kill each other first.

Get Real is a romantic comedy, urban fantasy whirlwind with sass, sex, and swoon.

Get Real Teaser POV: Francesca
The moon was full. I’d lost my cardigan somewhere in the house but this late in June, the night before the summer solstice, it was warm. The thump of bass and tinkling laughter from the party kept me company, but I was alone until a familiar weight crushed my lap.
The swing jolted sideways.
“Give us a sip,” Devi said, sprawling across me. “I’m parched.”
I half–heartedly shoved her.       “There’s this amazing old–school technology called a tap. It pours water to quench your thirst.”
“It’s too crowded in there. And some obnoxious ass is juggling kegs. This does not bode well for the rest of the evening.”
Great. I’d probably end up on healing duty.
Devi slid off me and swung her legs onto my lap, nestling against the green cushions resting along our backs. She held out her hand imperiously.
I handed over my soda. “Any sign of the target? Or his friends?” I asked.
“No sightings yet.” Eli slumped down on my other side. He flicked my knee to get me to move my leg from under his, since he’d sat on it. Then he snatched the bottle from Devi before I could grab it, and took a long swig.
Eli sputtered at the taste of it.   “Coke,” he said with the same disgust reserved for “herpes.”
I wiped off my arm with a grimace. “Where’s Byron?” I asked.
Eli set the bottle down between us. “Last I saw, she was pretending to hostess but really watching the front door like a hawk waiting for her boy toy to show.”
Byron gracefully sat down into the teak chair to my left, placing her own drink on the low table in front of us with a gentle clink of ice. She’d changed from her more casual sundress into dark skinny jeans and a sparkly black top, her hair curled in gentle waves. What a good–looking bunch we were. “Hardly a hawk,” she said.
“A lady hawk.” Eli leaned forward to inspect the dark liquid.
“Rum and coke,” Byron said, sliding her glass away from him. “And off limits to boys who insult.” I leaned my head on Eli’s shoulder. “This is nice. Who knows how many more moments we’ll have like this for a while?”
Eli slung his arm around me. Devi reached up to take his hand, while Byron swung a foot onto his lap, as we all watched a couple dance in lazy turns on the lawn to the dubstep pounding from the living room.
I was really lucky to have them, these friends who loved me for who I was, pointless boiler aspira- tions and all. I sighed, all warm and snug.
Then some guy stepped into the back doorway, framed by the soft light over the door and I forgot these people existed. Hip braced against the wood, he lounged all cocky arrogance. He wore dark straight–leg jeans, hanging low on his lean hips, and exposing a glimpse of hard abs under a T–shirt reading More Issues Than Vogue.
I laughed softly, even as my stomach clenched in swoony delight.
I couldn’t tell his eye color but he had black hair, cut short on the sides and longer on top.
He flexed a hand, rubbing it roughly over the top of his head. It left his soft–looking strands all mussed up. Even his fierce scowl didn’t detract from his looks. Though he wasn’t my usual pretty boy type.
The more I watched him from my cover of the shadowed swing, the more his smoldering dark looks made “pretty” kind of boring. “Figo,” I sighed. “Who is that? But don’t–    Every single pair of my friends’ eyes swung toward him. “… Stare,” I said.
“Hey.” Byron bounced on the seat at the sight of him. “That means Jones must be here.”
She glanced around.
Eli clamped a hand down on her as she tried to get up. “Play it cool.”
She grumbled but stayed put.
Devi swung her head between the unknown beautiful boy and me. “Do tell. I’m intrigued by any male who gets Frankie so hot and bothered.”
“Am…” I started to protest, but got distracted by the view as he turned around.
My friends snickered.
“Not,” I finished.
“Yeah you ‘am,’” Eli said. “Name him already Byron, so that Frankie may harness his body for unspeakable acts.”
I waved a flustered hand at him.   “Shut up.”
Devi half–raised her hand. “Wait. I want her to speak them. The acts.” She took my hand and placed it on Eli’s leg. “Or just point out on Eli where you’d like to touch this guy.”
I snatched my hand back with a long–suffering look. “Who is he?”
Byron lowered her voice. Not like he could hear us. “You must have heard of him. Rafael Muñoz?” Devi’s eyes widened. “That’s Javier’s infamous kid, Rafa?”
I deflated. Only because of his reputation and not at all because he now chatted with a supermod-el–gorgeous blonde. “Could he invade her personal space any more?”
I guzzled down the dregs of my Coke.
“Don’t think of Rafa as marriage material, more like ‘for a good time call,’” Byron said. 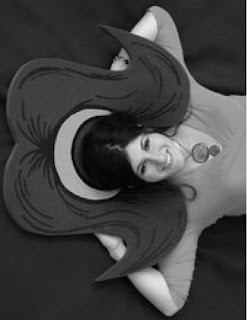 Tellulah DarlingnounSassy girls. Swoony boys. What could go wrong?1) YA & New Adult romantic comedy author because her first kiss sucked and she’s compensating.2) Firm believer that some of the best stories happen when love meets comedy and awkwardness ensues.3) Sassy minx.Both a hopeless romantic and total cynic, Tellulah Darling is all about the happily-ever-after, with a huge dose of hilarity along the way. Her romcoms come in a variety of flavours and heat levels.

Author links:   Website   |   Facebook   |   Twitter   |   Goodreads
GIVEAWAY
Blitz-wide giveaway (INTL)
-A signed copy of Get Real and a Get Real wristband with a quote from the book
-Ends October 1st

One response to “Book Blitz: Get Real by Tellulah Darling”