Once in a Blue Moon by Amie Stuart
Publication date: May 19th 2015
Genres: Adult, Contemporary, Romance
Synopsis:
At eighteen, Ty Boudreaux married his high school sweetheart and planned to live happily ever after on the family ranch. But after twelve years in a volatile, one-sided marriage, this gentle cowboy is struggling to put his life back together.
At eighteen, Bettina Blanchard’s goal in life had been to shake the dust of Bluebonnet, Texas off her heels, and with her baby sister now safely in college, that dream is within her grasp. But underneath Bad Betti’s tough exterior beats the heart of a woman with hopes and dreams, and she’s loved Ty almost as long as he loved his ex-wife.
When fate drops Ty in her lap, one night of passion leaves them dealing with a pregnancy and a marriage both have reservations about. Can a girl from the wrong side of the tracks and Bluebonnet’s favorite son find common ground outside the bedroom? Despite the interfering in-laws, a jealous baby sister and a holiday no one wants to remember, Betti and Ty discover that even though their happily ever after doesn’t come easy, anything worth having is worth working for.

Purchase:   Amazon
ONCE IN A BLUE MOON
AMIE STUART – Excerpt
On the way home Ty drove by Bettina’s again. The for sale sign hadn’t changed. But her grass sure needed to be cut.
If her car had been in the driveway, he would have stopped and let her know about Rhea’s threats. At least, that was the excuse he told himself. He sat parked at the curb, tapping his steering wheel and debating on whether to leave a note or not.
In hindsight, he could see his ex-wife’s abuse, her manipulation, the petty jealousies, her rages and tears went back even longer than the twelve years they’d been married—all the way to high school. The violence had started later. He’d never laid a hand on her, so her ability to casually inflict pain on him had left him stunned and confused.  But then, so had her lack of interest in working things out.
What would his life have been like if he and Bettina had dated in high school? Or if he’d dated anyone other than Rhea, for that matter. He smiled, remembering how he’d occasionally catch Bettina mooning after him. He’d never said anything but always found it flattering, even if she had run with a rough crowd.
Put it in perspective. He shook it off. Rhea didn’t deserve that much time. He hated not fighting back, but refused to stoop to her level and make a scene.
A part of him wanted to take Zack’s advice and call Bettina up, but the rest of him just didn’t feel ready for all that. Dating and flowers and…he’d learned he wasn’t a very good judge of character. But here he sat, outside her house like a lovesick fool. And his momma would probably know about it before he got home. He snorted and reached for the ignition only to stop and lean on the steering wheel, not quite ready to leave.
Funny how he could sit here so many years later and remember walking Bettina home from that dance in the sixth grade. To the very same house with the same cracked cement walkway. Funny how life could change but stay the same.
He chuckled again. Funny he’d never considered whether he was a breast man or not before. But he could remember, even in the sixth grade, Bettina had been chesty. His skin prickled as the temperature in the truck went up about ten degrees and the crotch of his jeans tightened.   She still had big breasts with tight pink nipples and wasn’t at all bashful about ‘em either. He groaned and adjusted his jeans.
And all that soft curly hair. And pouty lips. And those eyes. Those big green eyes that laughed and said, “I dare you.”
Maybe it wasn’t her chest size but everything about her. There was something powerful about her that had turned him on that night. Sex with her had been like some forbidden treat. A guilty pleasure—like his sweet tooth. Just the thought of her naked and riding him again, the memory of their quickie in the chair, her kisses, her teasing made him hard all over again. He suddenly realized how hot he was, how his shirt stuck to his back. Hell, the temperature had to be 104 today, and here he sat in a tin can with a raging hard-on.
If he weren’t wearing his best jeans, he’d cut her grass. At the least manual labor would take care of his erection—though so would jacking off.
If the neighbors wouldn’t see him doing her yard work, though honestly, it didn’t look like anyone was home.
If his mom heard he’d cut Bad Betti Blanchard’s grass, she’d really light into him. Momma had settled down some, but she still had her moments. And she already thought he was half off his rocker anyway.
Fuck it.
He climbed out of his truck, quietly closing the door. Like anyone was gonna hear him.
He couldn’t remember who lived to Bettina’s right, but to her left was Old Lady Lindsay. She was ninety, if she was a day, smoked like a freight train and drove her gigantic ancient Oldsmobile to the Senior Recreation Center every afternoon for bingo. And had since he was in high school.
Ty casually looked around again.  Not a soul. He unbuttoned his shirt and tossed it in his front seat, thankful he’d worn an undershirt.   Then went to find Bettina’s lawnmower. 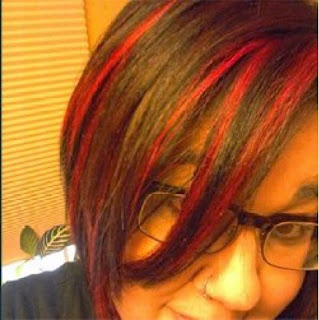 Amie Stuart is the last of a dying breed, a native Texan, and still makes her home there, where cowboys and music (her other two loves) abound. Growing up, she wanted to be a lawyer and a psychologist. No doubt the shrinks would have a field day with her head, but she’s seen the error of her ways and considers all those other jobs ‘research’ for the writing gig.
She’s a multiple contest finalist as well as a trained contest judge and is affectionately know as The Terminator by her critique partners. She’s written as CELIA STUART for Black Lace Books, & Liquid Silver Books, and as AMIE STUART for Kensington Aphrodisia, she has a short story (PEACHES ‘N CREAM) in Zane’s CARMEL FLAVA 2, and launched Cobblestone Press’s short erotica line,Wicked in 2007.
Giveaway!
-One (1) ebook copy of Once in a Blue Moon.
-Open internationally.