Bad boys, tortured alpha heroes, and kick-ass heroines all come together in 12 steamy full-length paranormal romance novels and novellas from NY Times, USA Today, and national bestselling authors! Whether you’re looking for tantalizing dark tales or the humorous side of the supernatural, you’ll get werewolves, vampires, fallen angels, monster hunters, and ghosts—every one of them a hot temptation you won’t be able to resist…
DIABLO SPRINGS by Erin Quinn: Gracie Beck vowed that she would never to return to Diablo Springs, but the haunted town lures her back—along with the man who betrayed her years ago. Reilly broke her heart with his lies. Now, he wants a second chance to win her, but can they survive the ghosts of Diablo Springs?
VAMPIRE REBORN by Caridad Pineiro: Would you be reborn for love? Ryder Latimer, sexy Southern vampire, will have to make one of the most difficult choices in his undead life: Become human again or protect his new wife and child.
SHADOW FALL by Erin Kellison: Just discovering her magic, ballerina Annabella Ames didn’t mean to summon a dark wolf from Twilight, nor the tempting fallen angel Custo Santovari, who has no place in Heaven. The cunning wolf stalks them relentlessly, and danger seduces as they fight for redemption and love.
NIGHT ANGEL by Lisa Kessler: When Colin Flynn returns home to Ireland, the immortal Night Walker’s flesh has healed, but the scars hide a broken spirit. Juliana Duffy plays piano in spite of her deafness, challenging him to redefine himself and find the strength to battle an ancient enemy.
SHADOWS TILL SUNRISE by Chris Marie Green: Two monster hunters fighting a star-crossed attraction and one bloodthirsty phantom leaving a trail of death… Can love survive till the sun rises?
A SHADOW AT TWILIGHT by Mary Leo: They say Hotel Colorado is haunted, but when Dillon Spencer appears in his hotel room to find Hilly Thompson, his assistant, soaking in the tub, he begins to question whether or not he’s alive, dead, or caught in another dimension.
MORE THAN FIENDS by Maureen Child: At 32, Cassidy Burke discovers she’s a legendary Demon Duster. But she’s got bigger problems than some pesky demons. Like, Logan Miller–first love, baby daddy to her genius daughter is back. Then there’s Devlin Cole, a walking orgasm with too many secrets. Cassidy’s life is out of control and about to get way too interesting.
IMMORTAL POSSESSION by Cassi Carver: When Dr. Evelyn Vale is paired with Immortal Bounty’s sexy commander to go undercover and infiltrate a supernatural body-trafficking ring, she’s eager to get to work. Until she learns the catch… To crack this case, he’ll need to possess her body.
FOREVER ROSE by Janet Wellington: Tarot cards predict a dangerous journey for Taylor Rose, but she doesn’t expect to travel back to 1888 San Diego. What the cards didn’t predict was falling for a man bent on revenge, a helpful ghost, and spooky séances. Is she there to prevent a murder or to find love?
WELCOME HOME, VAMPIRE by Theresa Meyers: Corporal Cole Wagner lost his humanity in war – literally. Turned into a vampire by the military’s Vector Force, he’s the ultimate weapon, but when he returns home to set the past right, will the enemy stop at nothing to get him, including threatening the life of the woman he loved, and lost, before?
VAMPIRE MAGIC (Blood Genie, books 1 and 2) by Sheri Whitefeather: Two tenderly romantic, wildly erotic stories featuring supernatural hybrids (vampires/genies) who grant wishes for the exchange of blood.
WILD NIGHTS WITH A LONE WOLF by Elisabeth Staab: A mandatory vacation lands Agent Sherri Walker in bed with a local werewolf. Asher Hughes walked away from his outlaw pack but couldn’t ditch the bad blood. Together they’ll have to pull off one hell of an act to get out of treacherous territory alive.

Purchase Links:    Amazon   |   Barnes & Noble
Excerpt From Night Angel
A single glass remained on the table. Colin approached, careful not to touch it. If the police were going to be involved, he didn’t want his fingerprints on the glass. He leaned down, closing his eyes as he inhaled slowly. The rich scent of the stout assaulted his preternatural senses.
Patiently, he took one more breath.
And caught the salty smell of the ocean and fainter still, blood.
He straightened, his pulse racing. If he had dealt with the water horse already, none of this would’ve happened. This was his responsibility. He rotated his left shoulder. Doubt lingered at the edge of his consciousness, taunting him.
Colin spun around, his eyes meeting Juliana’s. “Call the police. They can dust the glass for fingerprints and check the liquid for drugs.”
She frowned. You think he drugged her and carried her out?
The sick bastard wouldn’t need drugs. The hypnotic tone of his voice would be enough to lure Muriel out of her pub without locking up. But he couldn’t tell Juliana that.
Colin shrugged. “It is worth checking.” He stepped close to Bartley, keeping his face turned away from Juliana. “Stay with her and keep her safe. I need to hunt.”
Bartley leaned in closer. “Is it…?”
Colin nodded and focused on Darby again. “I’m afraid we need to close the pub early tonight.”
Darby grabbed his hat from the stool next to him and stood up. “Understood. If there’s anythin’ I can do to help…”
“We’ll let you know. The police might want the guy’s description again.”
Juliana approached, words already written on her notepad. Thanks for watching the till, Darby. When Muriel gets back, she owes you a drink.
He chuckled and swiped the air with his hand. “No bother.” He gave Juliana a gentle hug. “They’ll find your cousin.”
Colin waited for her eyes to meet his before he spoke again. “I am going to check the other pubs to find out if anyone has seen her. Bartley will stay with you and wait for the police.” He glanced at Claire. “Can I walk you to your car?”
Claire gave him a knowing look. Her go-get-’em look. “Yes, thank ye.”
He tipped his head. As she came around the bar, he turned his attention back to Juliana. Her determined stance reassured him. She was a fighter, heart and soul. He didn’t need to peer into her mind to see it. “I’ll meet up with you before sunrise.”
He stepped closer to her, the floral scent of her skin enticing him. She tipped her chin up, staring into his eyes, as his finger tenderly traced her jawline. He had to touch her soft, warm skin. This woman had been through enough already. Losing her cousin would surely break her. He needed to protect his territory, but now it was personal. He had to protect Juliana. And right now, that meant finding Muriel. He could not fail.
Leaning closer, he whispered, “Please be safe.”
Her lips parted, tempting him to bridge the distance between them. Before he could act, she rose on her toes and her lips tenderly brushed his, setting fire to his ancient soul. She lowered, breaking the kiss, her lashes fluttering up as she stared at him.
Her rose-colored lips mouthed the words Thank you. Finally she slid her notepad off the bar. See that you come back soon.
The corner of his mouth tugged into a lopsided smile, forgetting any previous hesitation about confronting Benedict. He lifted her hand to his lips, pressing a kiss to her fingers. “Be careful.” 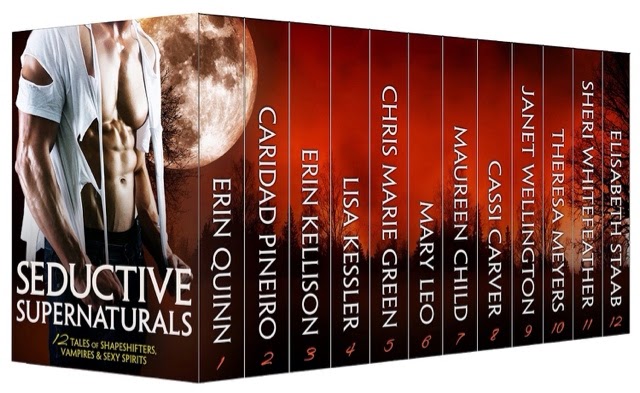