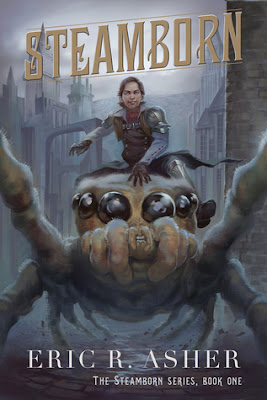 Jacob, a tinker’s apprentice and sometime thief, has lived his entire life in the mountain city of Ancora, protected by the city walls. These towering barriers keep the Deadlands creatures at bay, but the monsters move higher into the peaks every year. More and more, they breach the defenses of the Lowlands while the Highlands rest easy.


A swarm overruns the walls and wreaks utter devastation on the Lowlands. Charles, the old tinker, suspects the attack may not be natural. With help from Jacob’s closest friend, Alice, and Samuel, one of the city’s elite spider knights, Jacob and Charles will uncover a terrible darkness at the heart of their city.


EXCERPT
Jacob ran. He heard
the shouts of the market guards as they chased him through the muddy
cobblestone streets of Ancora. Their armor gave away their position as the
metal plates clanged together and their boots fell heavy on the stones.
“There!” a guard
said.
Jacob dove under a
peddler’s table, scattering rugs and crates as the woman hissed at him to run faster. Jacob grinned when he
realized the peddler was rooting for him
and not the guards. The armored guards would never be able to dip under the
thick stone tables that rested across the ancient troughs. They’d have to go
around, or over, and Jacob knew their armor was too heavy for that.
“Get back here, you
Lowland maggot!”
Jacob glanced back. The enraged armored forms were
momentarily frozen in front of the brightly colored tents and tables before
Jacob vanished down an alley. They could still catch him on the next street if
he wasn’t careful, or if he wasn’t fast
enough.
Something sizzled
in a large metal pot near the last stall he sprinted
past, and for a moment, Jacob wished it were food in his pocket instead
of the loot he’d been lucky to take. He slid around the corner of an old brick
house with a tiled roof and slipped into
a narrow alley most people never would
have noticed. The Highborn guards, used to the wide streets behind the city
wall, didn’t have a chance of tracking Jacob through the maze of dim back
alleys.
He
eased farther into the shadowed space as the shouts and curses of the guards
grew louder and then faded as they passed him by. He caught a glimpse of the polished silver
armor as two of the men rushed onward. None of them glanced at the small alley.
Jacob smiled and felt his pockets. Still there, his fingers met the reassuring
bumps of his prize. He forgot the smell of food as he imagined finishing the
pistons he’d built with Charles for the new boiler. With a good cushion, they could run for hours, or more. They’d just have to—
“Jacob Arthur
Anders,” a voice said from behind him, deeper in the alley.
Jacob spun, knocking
his elbow on an uneven brick in the wall and cursing as he stumbled back a
step. “Alice! What are you doing here?”
Alice leaned
forward, her gray wool dress barely clearing the wet ground. Her red hair hung
in curls, brushing her shoulder as she looked down at Jacob’s hand and frowned.
She raised her eyes to meet his, and he could still tell they were blue, even
in the dim light of the alley. “What did you steal now?”
“What are you
talking about?”
“You have your hand
over your pocket.” The amount of accusation in her voice startled him. Alice
pointed at his hand and said, “You only do that when you’re hiding something.”
“None of your
business,” he said, squaring his shoulders and standing up as straight as he
could. It left him a fraction of an inch taller than Alice.
“Oh, I think it is my business,” she said. 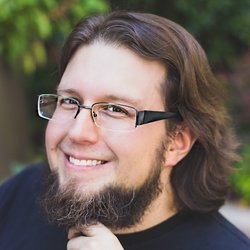 Eric is a former bookseller, guitarist, and comic seller currently living in Saint Louis, Missouri. A lifelong enthusiast of books, music, toys, and games, he discovered a love for the written word after being dragged to the library by his parents at a young age. When he is not writing, you can usually find him reading, gaming, or buried beneath a small avalanche of Transformers.