Book Reports…We’ve all had them while going through school. Some were super easy some, some were hard and some you had to give a presentation or a project on.

I remember one year, I had to do a two page summary of the book. A book I remember finding boring and lacking excitement. We didn’t get to pick the book really for this. We got four or five options from a stack of books the teacher had already picked out. It sucked! I dragged myself through the book just to do the paper to turn it in. I believe I got a “B” on it. And that was surprising since my paper was boring and lacking excitement also.
In 7th grade our English teacher let us pick a book for a book report. But it had to be Science Fiction. (I rarely read that genre now, it’s more my mom’s type of books.) I picked the book and I read it all the way through since I had to give a presentation to my class. My day came to talk about the book and the whole time a girl (I remember her name just not going to put it out there just in case she’s a follower) in the back kept making side comments about the book and saying “That didn’t happen.” “She must not have read the book.”  That went on the whole time I was in front of my class. As it turns out she had picked the same book for her presentation but didn’t read it all the way. So, pretty much she was trying to make my presentation look bad since hers was going to be bad. I go an “A” on that one.
It was all the same kind of reports through out me going to school, just boring summaries of the books. Finally when a fun project came up about a book it was also pushed into the boring category after the assignment was given. We read a book in class together then we had to do a shoe box picture about the book. I remember the book had taken place in the desert so there was a lot of sand going on in those boxes. Which yes it was fun doing but everyone’s projects looked the same. Which kind of sucked.
My oldest is in 6th grade this year and in his English/Reading class they got to pick a book for their book report. He picked Divergent by Veronica Roth. I was really excited over this! I couldn’t wait for him to read it so we could talk about the story. He finished the book and loved it! When I asked him when he was starting the report (I didn’t want a last minute project going on) he said, “It would take him a few minutes to do.” Um, what?! His “book report” was a generic two page paper with questions about the book that the teacher wrote up. So he just had to fill in the blanks. I was shocked this was his “report” for this class considering it’s an advanced class for his grade level. He could have written a paper for it since he’s capable. I was really bummed about it and disappointed that there wasn’t more to the report.
When he had to do another book report for this semester I thought it was going to be the same thing as last one. Just a generic fill in the blank. He picked Insurgent by Veronica Roth and again he loved it! Once he was done with it I asked about the report he had to do and to my surprise he had an actual project! He had to recreate the book’s dust cover. I found this very exciting and was excited to help him with it! Well I didn’t help him with it. He was giving me so much attitude and hated me asking questions that I just couldn’t do it with him. One of us wasn’t making it out alive if we worked together on it. My mom was nice enough to help him on it. He went to her house printed pictures, typed up what was required, cut, glued and colored everything. When he was done with it he absolutely hated it! So he literally started all over again from the beginning after working on the first one for hours. After all the trouble he went through to make it look good and 12+ hours later this is what he came up with… 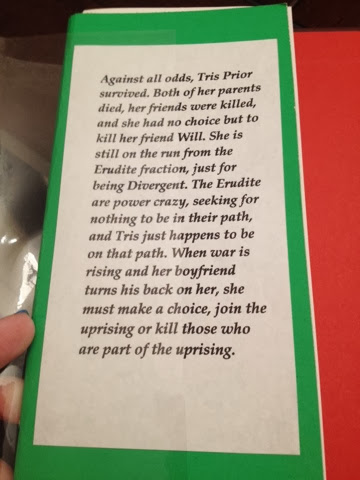 He had to write up a summary in his own words about the book on the inside cover. 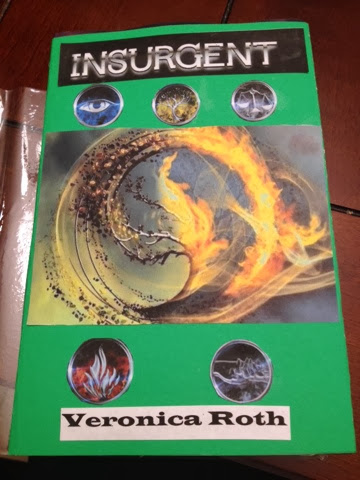 This was the cover of his book. 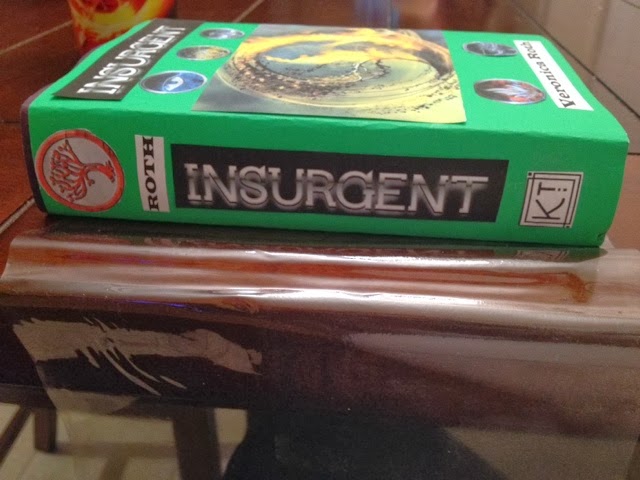 The spine of the book. The back cover of the book.  This is where he had to put his review.  He got extra points for having two reviews on it.  Since none of his friends read the book grandma put her review on there for him so he could get the max credits.
I think it turned out really well! He really wanted an “A” on it. Which he got.  But unfortunately  the teacher never saw any of the students project because a janitor threw the whole box of the covers away.  I’m so glad I ended up taking pictures of it for him.

What was your favorite book report or project in school?