ABOUT THE AUTHOR
Ace Antonio Hall is an actor, former music producer, and ‘retired’ educator with accolades as a Director of Education for the Sylvan Learning Center and nearly fifteen years experience as an award-winning NYC English teacher. He has a BFA degree with a concentration in screenwriting and has published poetry, short stories and fiction in magazines, anthologies, newspapers and novels.

Inspired by his father, Chris Acemandese Hall, who penned the lyrics to the Miles Davis jazz classic, “So What”, sung by Eddie Jefferson, and his sister, Carol Lynn Brown, who guest starred in the 1970’s film, “Velvet Smooth”, Ace spawned his creativity into developing the beloved but flawed teen character, Sylva Slasher.
Ace was the Vice President of the Greater Los Angeles Writers Society (2009-2011), and continues to head the Science Fiction, Fantasy & Horror (ScHoFan) Critique Group as Co-Director of critique groups within the society. He is also a member of LASFS and the International Thriller Writers.
On April 14, 2013, Montag Press published his YA zombie novel Confessions of Sylva Slasher. His next release, Skateboard Xombies, is coming out later this year, and he has already begun working on Skateboard Xamurai for the third installment in his Sylva Slasher series.
Amazon Author Page | Facebook | Twitter | GoodReads | Website | Blog | Instagram
Looking for some zombie gear? Check out Ace’s Zombie Pop Store!

HoloBleet – @sylvaslasher. Entry 526: I heard this song on my mother’s Visual iPod I bought her last Christmas. Here are the lyrics to the song which literally blew my mind: “The lunatic is on the grass … The lunatic is in the hall … And if your head explodes with dark forebodings too, I’ll see you on the dark side of the moon … And if the cloud bursts, thunder in your ear, you shout and no one seems to hear …” –Pink Floyd, Brain Damage
601 ReBleets, 11,493 Followers

DON’T THINK, FEEL
I stared into Jun Lee’s delightful violet eyes. His spirit wavered around me in a twisted battle of angst and charm. He was bald, except for a lone purplish-blue ponytail that nearly touched the Travertine-tiled floor. His smile broadened as helifted the thoughts from my head the way a cat burglar lifts a priceless diamond from the confines of a highly secured jewel display. He was a mind-dweller, a seer of thoughts, just like his father.
I gazed toward his flawless face, yet trembled like a statue that had been bumped by a reckless quake. I was frozen, declared inanimate from the moment his warm hand brushed against my neck, and his strong fingers grasped the back of my head, pulling my lips within a whispered breath of his own.
The mind-dweller’s audience salivated with anticipation. I, who had raised hundreds of the dead from the grave, and stared death in the face more times than I can count, sat in a blend of awe and terror of this beautiful vampire.
I fought to keep my mind, struggled to hide my thoughts. Yet, every fiber of my being burned with an intensity that mirrored the sweltering heat of the reddened night air outside of his parlor. I fought his intrusion the way an eagle’s feather argued with a strong breeze. It was futile. My memories opened to him like prey into a dragon’s mouth.

Sylva Slasher is about to drop out of high school … again. Thanks to another zombie outbreak that made her ditch graduation the first time. And that’s just for starters. Ever since the initial undead invasion, she’s been suffering from an anxiety disorder called PTSD–the same that soldiers returning from war get–but she’s only a teenager and her battles fighting the walking dead is more than traumatizing.


Now, Sylva is facing the most powerful zombies she’s faced yet: deadheads with telekinetic power. Help for Earth seems hopeless and a clan of vampire monks help Sylva, her skateboard-fanatic friends and her family escape to their home on an alternate world. Somehow, the telekinetic zombies find the same portal to that world and the only way to stop that world from total annihilation is to help a devious sorceress find her lost daughter’s soul; hidden in a secret crystal coffin. 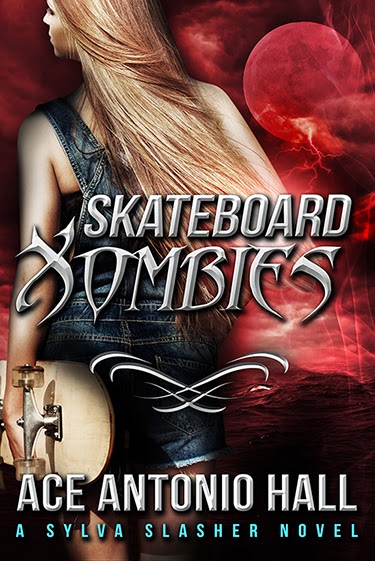