Let’s talk about the books behind our adopted author, Piper Shelly. For this post we will focus on her paranormal romance book, Loving Your Lies. This book recently receive a facelift which involved the title and cover being changed.
Remember whoever buys one of Piper’s books during the next three months of our adoption period and posts a picture of themselves with the book (or a pet or something) will be entered into to win a $25 Amazon gift card. The picture ,must be posted on our facebook page. 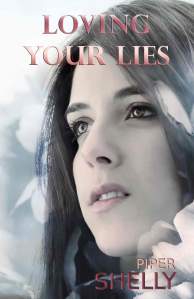 Original first title of this book: Her Game, His RulesShe’s seventeen. She’s snarky. She’s trouble…It wasn’t nicking an expensive watch or diamond bracelet that landed Jona Montiniere in the clutches of the police. It was just a darn sweater. After her last spectacular misadventure, she is forced to return to a mother who spurned her more than twelve years ago. Jona is furious about the judge’s decision—until she meets her mother’s companion. Gorgeous, provocative, and mysterious, Julian is everything her lonely heart desires…until he awakens her mother from the dead with a simple touch.What the hell is he? And why does he want to leave, just when she’s falling in love with him?


Review by Lisa: I really loved this book. Jona’s character is very realistic of someone who has went through the type of life she has and it is this realistic portrayal that made me love this book. There are not a lot of books which I’ve read that capture the emotions behind a teenagers behavior and this one was spot on. Since I am a social worker that accuracte portrayal is important to me. Being able to follow Jona through her change process was heart warming. As far as Julian goes…….well in my mind, he is a total HOTTIE! The only downfall of this book was when I finished it; I wanted more. I hope there is a sequel planned in the future. I would love to read more about Jona and Julian.


Review by Sarah: I really enjoyed this book! I loved the way the characters interacted with one another. I don’t like reading books with cancer in them but this one didn’t have it in your face like how some do. I was thankful for that. I can only hope there will be a follow up book so we can see how Julian and Jona’s lives are now.


Our next stop in Exploring The Fictional World Of Piper Shelly will be on February 16th, 2013; when we take a closer look at her romance novella, Play With Me.


Click on the below links to purchase the book (kindle or paperback) and don’t forget to take a picture and post it so you can be entered into the giveaway for a $25 Amazon gift card.