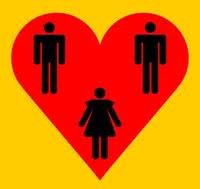 I understand that love triangles makes books more interesting, for some people. I am NOT one of those people. I feel like they are being over used in books and the situation is getting old & unwanted. It makes the book sometimes complicated when it doesn’t need to be. Some character’s lives are complicated enough as it is and let’s throw a love triangle in there? That poor character.

I hate when a girl is into a guy in the books and another guy comes into play from her past or he’s new to town. All it does is make me angry when she ends up with the one I didn’t want her to end up with because it was a bad choice. But if she ends up with who I want her to, then let’s continue on with the story. **Cough, cough Edward Cullen**

I’m at the point with love triangles that every time I’m reading a book and a romantic interest is shown I’m seriously waiting for another guy to pop up to cause an issue and wreck what the original two had. Dude just needs to go back where he came from because they were doing fine without him. And when there is a love triangle I always feel like the girl completely blows off one guy more than the other one. So we get the guys playing to win the girl over and the girl has no clue who to be with so she’ll be with both of them and let them fight it out. Maybe I need to keep to books that have vampires, wolves and other sups in it that have a bonding thing and there is no room for any other guys and the drama they bring.

2 responses to “I HATE Love Triangles”