On March 16th, 2013, we will be discussing Stolen Away by Alyxandra Harvey. You can find out about our online book club here. We hope to see you there! 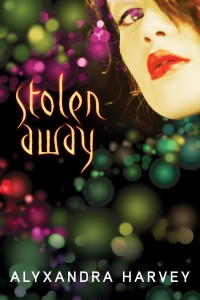 When a cute guy dressed like a Victorian pirate kneels in front of Eloise the day after her seventeenth birthday, she knows that something strange is going on-and that’s before he vows to be her champion and mentions her flaky aunt, Antonia, who’s gone incommunicado once again.
But this appearance isn’t a coincidence, and when Eloise is attacked and pushed into an alternate world called Faery, she becomes embroiled in the underground politics of this world. Her captor is Lord Strahan, the ruler of Faery who is desperately clinging to his throne and will do anything to keep it. The only one who can break his power is his wife, Eloise’s aunt Antonia-and Eloise has become his bargaining chip.

Now Eloise must find a way to save her aunt from Lord Strahan, and she’ll need the help of her best friends Jo and Devin, along with the other Fae captives of Strahan’s hall, including his son, Eldric. With a whole world of Faeries out to get her, Eloise must stop Strahan both worlds are thrust into complete chaos.