Now that I look back through my Twilight journey I find it very amazing how a book series has changed my life. Twilight has brought me many things and changed me in ways that I would have never thought possible. 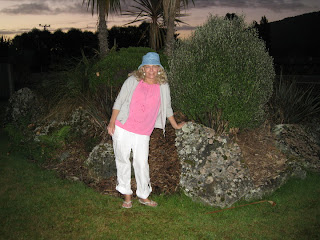 I was a bit of a late bloomer into the Twilight series. It all started when I was on my honeymoon in February 2010. While on the plane to New Zealand Twilight was showing on the plane; so of course, I watched it. It seemed to have followed me around to each hotel we were at because it was showing on the movie channel. I watched pieces of it here and there. Once we returned home, I rented both Twilight and New Moon to watch. I enjoyed the movies, but I was no where near the fanatic I am now. Eclipse was released that summer and I went to see it. After watching that I decided I needed to know what happened next. While I was home recuperating from donating a kidney to my brother, I read all the books in 6 days. The fastest I had ever read. That’s when it happened. I was a Twi-hard! I couldn’t get enough and read everything I could online about the series, movies, you name it, I read it. 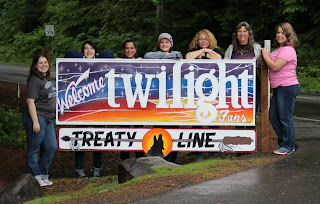 Once you’re a Twi-hard you begin collecting stuff. Well, at least I did. My first purchase was the trading cards and after I received those…it was all downhill. I now have an entire office full of Twilight memorabilia. You name it…I probably have it. I cannot post how much I have spent on my collection because my husband may read this blog post and I have been keeping it from him and quite frankly he told me he doesn’t want to know. 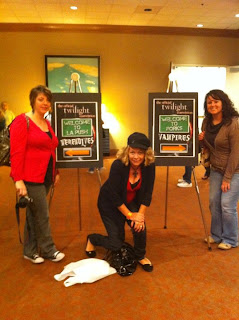 After the collecting begun, then my trips started to happen. The first trips were to Twilight Conventions. I traveled to Minnesota, Nashville, Dallas, and Chicago to attend the conventions. It was amazing meeting others like me. This was when I began to fully embrace my Twi-hardness.
In December 2010, I drove down to Louisiana to see if I could see anything while Breaking Dawn Part 1 & 2 was being filmed. I did see the Egyptian set and that was about it. The day after we arrived there was a signing at Best Buy and I was able to obtain some awesome autographs from actors who played the Volturi and Jasper. The energy that radiated inside that Best Buy was phenomenal. I was also lucky enough to meet the producer, Wyck Godfrey. This was an amazing day! 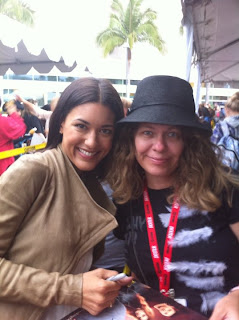 To be a Twi-hard you have to go to Forks, right? In June 2012 I did just this. I even dragged my husband and son along with me. Tried to convert them but it hasn’t worked yet. Forks was an amazing trip. To be there was like the books coming alive right in front of me. 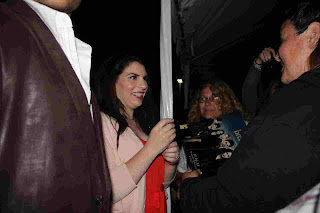 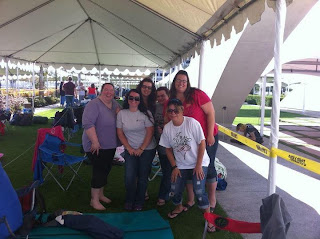 In July 2011 and 2012 I went to San Diego Comic Con. If you haven’t been to this …you totally should go. Both years there was a Breaking Dawn panel. I camped out under the white tents in order to get to see the actors and of course the trailer. Both years, actors came around the tents and gave autographs and took pictures with the fans. In July 2012, I was lucky enough to meet Stephenie Meyer and also won the autograph session with Robert Pattinson, Kristen Stewert, Taylor Launter, and McKenzie Foy. I was shaking so bad with excitement and nervousness. 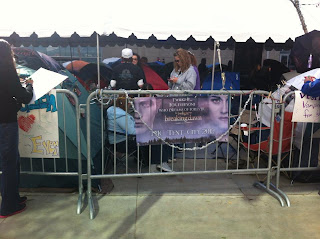 To be a Twi-hard you have to camp for days at tent city for the premiere. So that is what I did this year. I slept on the cement in a tent in downtown LA to have the opportunity to meet the actors and fully embrace my Twi-hardness. I even walked the streets in the pajamas without a bra but don’t tell my husband that part. It was such an amazing time and something that I will never forget. 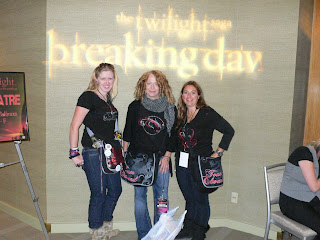 Through all these trips I have met some of the most wonderful people that I have ever met. Some true friendships have been developed due to Twilight. I actually met Sarah online at Twilight Mom’s Club and then in person at a Dallas Twilight Convention. Since we met we have traveled to three different Twilight events together. I have traveled more with her over the last year than I did with my husband. 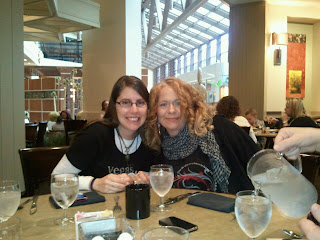 Prior to reading the Twilight series, I was pretty narrow on my reading choices and would only read books by John Saul, Dean Koontz and Stephen King. Thanks to Twilight, I now have broadened my reading choices. If I look through my reading list for this year I probably have read books from over 60 different authors. I also read a lot more then I did prior to Twilight.
Twilight has brought me friendships, opened my mind to other books/authors, and has allowed me to travel to places where I wouldn’t have thought of going…Forks? Yea, I wouldn’t have thought of going there prior to Twilight. But most of all…Twilight has brought me awesome memories. I know it sounds cliché; but Twilight has changed my life in so many ways. The power of this series still amazes me and probably will continue to amaze me forever. A huge thanks to Stephenie Meyer for writing the series that has captivated my heart. A huge thanks to Summit for bringing this amazing series to the big screen. And a big thanks to all the actors which played in the movies and handled all of us Twi-hards with a smile. Twilight will forever be in my heart!
A blog post by Lisa
Tweet