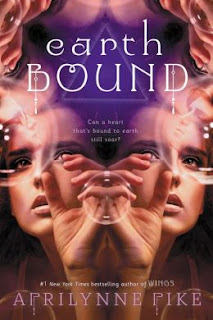 Tavia Michaels is the sole survivor of the plane crash that killed her parents. When she starts to see strange visions of a boy she’s never spoken with in real life, she begins to suspect that there’s much about her past that she isn’t being told.

Tavia immediately searches for answers, desperate to determine why she feels so drawn to a boy she hardly knows. But when Tavia discovers that the aunt and uncle who took her in after her parents’ death may have actually been responsible for the plane crash that killed them—and that she may have been the true intended victim—she flees for the safety of Camden, Maine, where the boy she sees in her visions instructs her to go.

Now, Tavia is on the run with no one to trust. No one, that is, except for her best friend and longtime crush, Benson.

Tavia feels torn between the boy who mysteriously comes to her at night and the boy who has been by her side every step of the way. But what Tavia doesn’t know is that the world is literally falling apart and that to save it she will have to unite with the boy in her visions. Only problem? To do so would mean rejecting Benson’s love. And that’s the one thing Tavia Michaels swore she’d never do. 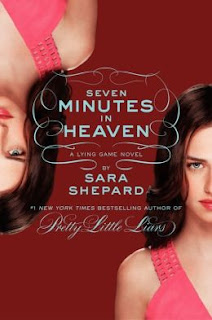 The Lying Game #6: Seven Minutes in Heaven by Sara Shepard

Sutton Mercer had the perfect life, great friends, and a gorgeous boyfriend…until someone murdered her. Then the killer forced Sutton’s long-lost twin sister, Emma, to pretend to be her.

Now Sutton can only watch from beyond the grave as Emma frantically tries to figure out who killed her sister, and why. But when Sutton’s body is discovered, Emma’s time is up—and she becomes the number-one suspect herself.

In this final volume of The Lying Game, Emma learns the chilling truth about her sister’s murder…but the killer will do whatever it takes to make sure Emma never breathes a word. 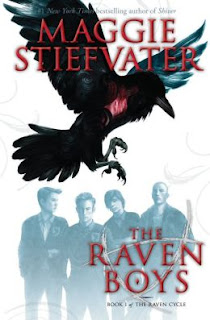 The Raven Boys by Maggie Stiefvater

It is freezing in the churchyard, even before the dead arrive.
Every year, Blue Sargent stands next to her clairvoyant mother as the soon-to-be dead walk past. Blue herself never sees them-not until this year, when a boy emerges from the dark and speaks directly to her.
His name is Gansey, and Blue soon discovers that he is a rich student at Aglionby, the local private school. Blue has a policy of staying away from Aglionby boys. Known as Raven Boys, they can only mean trouble.
But Blue is drawn to Gansey, in a way she can’t entirely explain. He has it all-family money, good looks, devoted friends-but he’s looking for much more than that. He is on a quest that has encompassed three other Raven Boys: 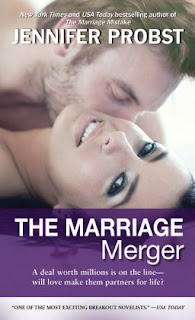 The Marriage Merger by Jennifer Probst

Her sisters have found wedded bliss with their wealthy, wonderful dream men, but not Julietta Conte. She’s stayed on terra firma as top executive of the family’s corporation, La Dolce Famiglia bakery. Work is her passion, and her trendy Milan apartment her sanctuary . . . until Sawyer Wells, a masculine masterpiece in a suit, lures her out of hiding with an irresistible offer: an exclusive partnership with his international chain of boutique hotels.

Julietta’s been burned before—and trusting her brother-in-law’s friend, whose powerful gaze alone has her rethinking the best use of a conference room, is the riskiest proposition. But with a once-in-a- career chance to take the bakery global, will she mix stone-cold business with red-hot seduction? 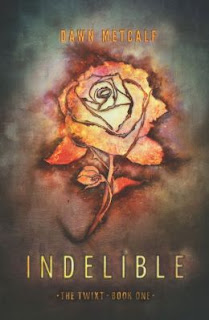 Some things are permanent. Indelible. And they cannot be changed back.

Joy Malone learns this the night she sees a stranger with all-black eyes across a crowded room—right before the mystery boy tries to cut out her eye.

Instead, the wound accidentally marks her as property of Indelible Ink, and this dangerous mistake thrusts Joy into an incomprehensible world—a world of monsters at the window, glowing girls on the doorstep and a life that will never be the same.

Now, Joy must pretend to be Ink’s chosen one—his helper, his love, his something for the foreseeable future…and failure to be convincing means a painful death for them both.

Swept into a world of monsters, illusion, immortal honor and revenge, Joy discovers that sometimes, there are no mistakes.

Somewhere between reality and myth lies… 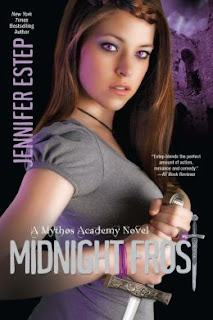 Just when it seems life at Mythos Academy can’t get any more dangerous, the Reapers of Chaos manage to prove me wrong. It was just a typical night at the Library of Antiquities—until a Reaper tried to poison me. The good news is I’m still alive and kicking. The bad news is the Reaper poisoned someone else instead.

As Nike’s Champion, everyone expects me to lead the charge against the Reapers, even though I’m still hurting over what happened with Spartan warrior Logan Quinn. I’ve got to get my hands on the antidote fast—otherwise, an innocent person will die. But the only known cure is hidden in some creepy ruins—and the Reapers are sure to be waiting for me there . . . 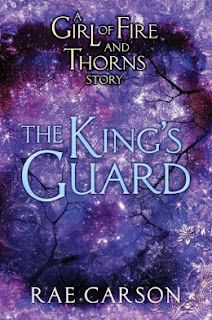 The King’s Guard: A Girl of Fire and Thorns Novella (ebook)

Hector of Ventierra is the youngest commander of the Royal Guard in his kingdom’s history. But before he was lord commander, he was a lowly squire. In this short fantasy novella, set in the world of The Girl of Fire and Thorns, Rae Carson introduces readers to Hector before he became the man Queen Elisa fell in love with. The King’s Guard also includes a teaser chapter for The Bitter Kingdom, the conclusion to the Fire and Thorns trilogy.

At fifteen years old, Hector is the youngest squire in the most elite military force in the country. And his first day is disastrous. Everyone assumes the only reason he was recruited is his close personal association with King Alejandro, not because he’s really earned it.

But Alejandro needs Hector for a secret mission, one that gives him the chance to prove to everyone—including himself—that he is worthy to be a Royal Guard. Hector must break into the ancient Fortress of Wind to retrieve something so important that the kingdom’s future depends on it. What Hector finds in the fortress will stretch his bond of friendship with his king near to breaking. And it will prepare him to become the fearsome warrior and lord commander Elisa will never let go.

A riveting prequel to Rae Carson’s epic and acclaimed Fire and Thorns series. 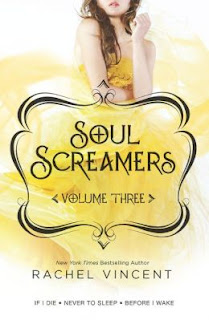 Soul Screamers Volume Three: If I DieNever to SleepBefore I Wake by Rachel Vincent

What happens when the reapers come for Kaylee?

Thanks to her mother’s sacrifice, Kaylee Cavanaugh has lived most of her life on borrowed time, but now that borrowed time is almost up. Kaylee has only seven days left to prepare for the end. To say goodbye. And yeah, to stop an incubus from preying on her high school. Tick tock…

Dying wasn’t easy for Kaylee, but faking life is a whole new kind of struggle. The only good moments are those spent in Tod’s arms. But death hasn’t stopped her old enemies, and now everyone Kaylee loves is in danger….

Sophie Cavanaugh is sick of the social fallout from her cousin Kaylee’s mental issues. Doesn’t she realize people think “crazy” runs in the family? But then a cute boy, a fateful scream and a trip to a nightmare world leave Sophie wondering just what’s real-and how to get home….

The last thing you hear before you die. 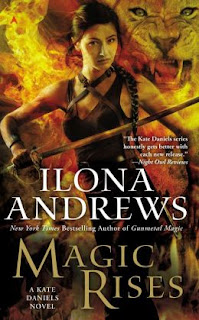 Atlanta is a city plagued by magical problems. Kate Daniels will fight to solve them—no matter the cost.

Mercenary Kate Daniels and her mate, Curran, the Beast Lord, are struggling to solve a heartbreaking crisis. Unable to control their beasts, many of the Pack’s shapeshifting children fail to survive to adulthood. While there is a medicine that can help, the secret to its making is closely guarded by the European packs, and there’s little available in Atlanta.

Kate can’t bear to watch innocents suffer, but the solution she and Curran have found threatens to be even more painful. The European shapeshifters who once outmaneuvered the Beast Lord have asked him to arbitrate a dispute—and they’ll pay him in medicine. With the young people’s survival and the Pack’s future at stake, Kate and Curran know they must accept the offer—but they have little doubt that they’re heading straight into a trap… 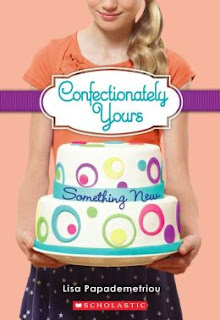 Something New (Confectionately Yours Series #4) by Lisa Papademetriou

Confession: Everyone’s heading for happily ever after . . . and leaving me behind!

Hayley’s life hasn’t exactly been a piece of cake, and now there’s even more change in store: an adorable new puppy, a possible new school, and a new baking challenge – a wedding cake for her grandmother’s big day! Too bad the puppy isn’t housebroken, the school is filled with ritzy girls, and Hayley’s practice cakes keep collapsing. With her friends and family pulling her every which way, it’s no wonder Hayley’s mixed up in madness!