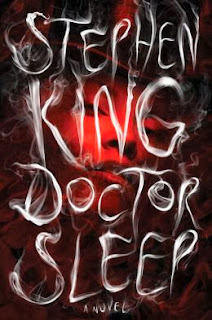 On highways across America, a tribe of people called the True Knot travel in search of sustenance. They look harmless—mostly old, lots of polyester, and married to their RVs. But as Dan Torrance knows, and spunky twelve-year-old Abra Stone learns, the True Knot are quasi-immortal, living off the steam that children with the shining produce when they are slowly tortured to death.

Haunted by the inhabitants of the Overlook Hotel, where he spent one horrific childhood year, Dan has been drifting for decades, desperate to shed his father’s legacy of despair, alcoholism, and violence. Finally, he settles in a New Hampshire town, an AA community that sustains him, and a job at a nursing home where his remnant shining power provides the crucial final comfort to the dying. Aided by a prescient cat, he becomes “Doctor Sleep.”

Then Dan meets the evanescent Abra Stone, and it is her spectacular gift, the brightest shining ever seen, that reignites Dan’s own demons and summons him to a battle for Abra’s soul and survival. This is an epic war between good and evil, a gory, glorious story that will thrill the millions of devoted readers of The Shining and satisfy anyone new to this icon in the King canon. 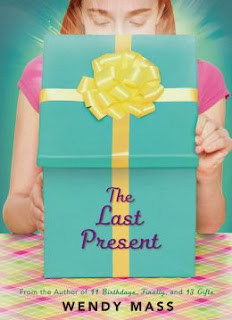 The Last Present by Wendy Mass
Don’t miss the latest entry in the incredible Willow Falls series by Wendy Mass!

Amanda and Leo have a history with birthdays. Now their friend’s little sister, Grace, has fallen into a strange frozen state on her birthday, and Amanda and Leo must travel in time in order to fix whatever’s wrong. As they journey back to each of Grace’s birthdays, they start seeing all sorts of patterns . . . which raise all sorts of questions.

Amanda and Leo are going to have to unravel the threads of the past and present – and travel much further than they ever imagined – if they’re going to save Grace. Luckily, a little birthday magic always helps in the charming and funny Willow Falls series by Wendy Mass, where everything is possible and there are no coincidences. 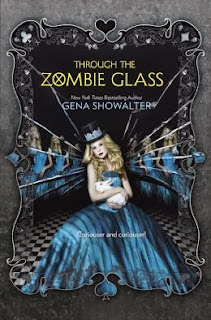 Through the Zombie Glass by Gena Showalter Zombies stalk the night. Forget blood and brains. These monsters hunger for human souls. Sadly, they’ve got mine…

Alice Bell has lost so much. Family. Friends. A home. She thought she had nothing else to give. She was wrong.

After a new zombie attack, strange things begin to happen to her. Mirrors come to life, and the whispers of the dead assault her ears. But the worst? A terrible darkness blooms inside her, urging her to do very wicked things.

She’s never needed her team of zombie slayers more, but ultra bad-boy Cole Holland, the leader and her boyfriend, suddenly withdraws from her…from everyone. Now, with her best friend Kat at her side, Ali must kill the zombies, uncover Cole’s secret and learn to fight the darkness.

But the clock is ticking…and if she fails at a single task, they’re all doomed.

I’ve lost so much.

My purpose. My pride.

And it’s my fault. I can blame no one else.

I and I alone let the darkness in. 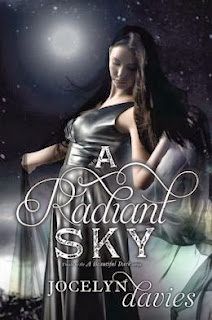 Since the night of her seventeenth birthday, Skye has been torn between two opposites: light and dark, the Order and the Rebellion, Devin and Asher. But in a shocking decision, she chose neither.

With the help of her friends, Skye now forges her own path, setting out to gather an uprising of Rogues. The elusive half-angels may be the key to maintaining the balance of fate and free will. But completing the mission her parents left unfinished is more difficult—and dangerous—than she could have imagined. And doing so comes at a cost: her greatest love may now be a lethal enemy. Because it’s not just the Order that sees her as a threat who must be eliminated. The Rebellion does, too.

Dark days lie ahead, and if Skye is to survive, she’ll need to rely on her extraordinary powers and the strength of her will. Because she has a future—and a love—that’s worth fighting for. 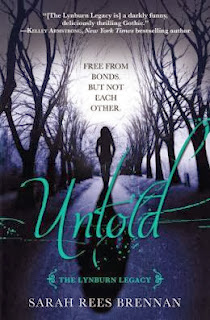 In this second book in the Lynburn Legacy, the sorcerous roots of Sorry-in-the-Vale have been exposed. No one in the town is safe, and a decision must be made: pay the sorcerers’ blood sacrifice, or fight. Will the townspeople (magical and not) become “owned” by the sorcerers who believe it is their right to rule? If Kami Glass has anything to say about it, evil will not win. Despite having given up her own piece of magic, she is determined to do everything she can to make a difference. And whether they want to or not, her circle of friends (and potential boyfriends) will not be able to help but go along with her unusual tactics. 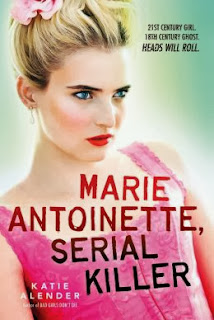 Paris, France: a city of fashion, chocolate croissants, and cute boys. Colette Iselin is thrilled be there for the first time, on her spring break class trip.

But a series of gruesome murders are taking place around the city, putting everyone on edge. And as she tours the sights, Colette keeps seeing a strange vision: a pale woman in a ball gown and powdered wig, who looks like Marie Antoinette.

Colette knows her status-obsessed friends won’t believe her, so she seeks out the help of a charming French boy. Together, they discover that the murder victims are all descendants of people who ultimately brought about Marie Antoinette’s beheading. The queen’s ghost has been awakened, and now she’s wreaking her bloodthirsty revenge.

And Colette may just be one of those descendants . . . which means she might not make it out of this trip alive. 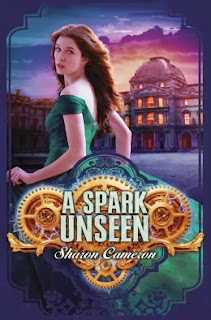 A Spark Unseen  by Sharon Cameron

When Katharine Tulman wakes in the middle of the night and accidentally foils a kidnapping attempt on her uncle, she realizes Stranwyne Keep is no longer safe for Uncle Tully and his genius inventions. She flees to Paris, where she hopes to remain undetected and also find the mysterious and handsome Lane, who is suspected to be dead.

But the search for Lane is not easy, and Katharine soon finds herself embroiled in a labyrinth of political intrigue. And with unexpected enemies and allies at every turn, Katharine will have to figure out whom she can trust–if anyone–to protect her uncle from danger once and for all.

Filled with deadly twists, whispering romance, and heart-stopping suspense, this sequel to THE DARK UNWINDING whisks readers off on another thrilling adventure. 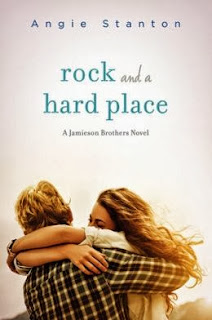 Perfect for fans of Sarah Dessen, Jenny Han, and Susane Colasanti, Angie Stanton’s swoon-worthy romance—about an ordinary girl and a young rock star—will keep readers on the edge of their seats . . . and leave them wanting more.

In an instant, Libby’s life went from picture-perfect to a nightmare. After surviving a terrible car accident, Libby is abandoned by her father and left with her controlling aunt. A new town, a new school, no friends—Libby is utterly alone. But then she meets Peter.

The lead singer in a rock band with his brothers, Peter hates that his parents overly manage his life. Constantly surrounded by family, Peter just wants to get away. And when he meets Libby, he’s finally found the one person who just wants to be with him, not the rock star.

But while Peter battles his family’s growing interference in both his music and personal life, Libby struggles with her aunt, who turns nastier each day. And even though Libby and Peter desperately want to be together, their drastically different lives threaten to keep them apart forever. 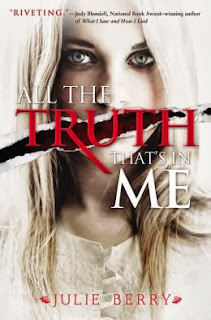 All the Truth That’s In Me by Julie Berry

Four years ago, Judith and her best friend disappeared from their small town of Roswell Station. Two years ago, only Judith returned, permanently mutilated, reviled and ignored by those who were once her friends and family.

Unable to speak, Judith lives like a ghost in her own home, silently pouring out her thoughts to the boy who’s owned her heart as long as she can remember—even if he doesn’t know it—her childhood friend, Lucas.

But when Roswell Station is attacked, long-buried secrets come to light, and Judith is forced to choose: continue to live in silence, or recover her voice, even if it means changing her world, and the lives around her, forever.

This startlingly original novel will shock and disturb you; it will fill you with Judith’s passion and longing; and its mysteries will keep you feverishly turning the pages until the very last. 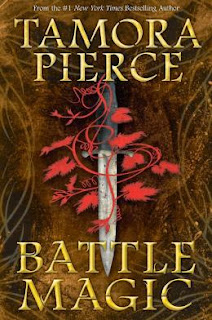 Battle Magic by Tamora Pierce On their way to the first Circle temple in Gyongxi, mages Briar, Rosethorn, and Evvy pay a visit to the emperor’s summer palace. Although treated like royalty when they first arrive, the mages soon discover that the emperor plans to invade Gyongxi, posing a fatal threat to the home temple of the Living Circle religion. Accompanied by one of the emperor’s prize captives, the three mages rush to Gyongxi to warn its citizens of the impending attack. With the imperials hot on their trail, Briar, Rosethorn, and Evvy must quickly help the country prepare for battle. But even with the help of new allies, will their combined forces be enough to fight the imperial army and win the war? 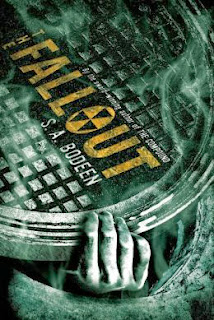 The Fallout by S.A. Bodeen Eli and his family lived in an underground shelter they called the Compound for six years. They thought they were the only survivors of a nuclear attack, but when Eli learned that it was all a twisted experiment orchestrated by his tech-visionary father, he broke the family out. His father died trying to keep them imprisoned.

Now, the family must readjust to life in the real world. Their ordeal has made them so famous, they must stay in hiding—everyone from fatalists preparing for doomsday to the tabloid media wants a piece of them. Even worse, their father’s former adviser continues to control the company Eli and his twin brother are the heirs of.

As Eli tries to determine who the family can trust, he learns the nightmare of the Compound—and his father’s experiment—might not be over. The Fallout is S.A. Bodeen’s highly anticipated, thrilling sequel that will keep readers on the edge of their seats. 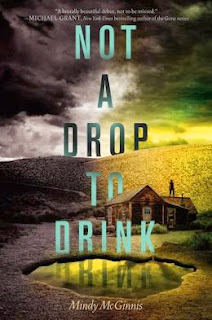 Not a Drop to Drink by Mindy McGinnis

Fans of classic frontier survival stories as well as readers of dystopian literature will enjoy this futuristic story where water is worth more than gold.

Teenage Lynn has been taught to defend her pond against every threat: drought, a snowless winter, coyotes, and, most important, people looking for a drink. She makes sure anyone who comes near the pond leaves thirsty or doesn’t leave at all.

Confident in her own abilities, Lynn has no use for the world beyond the nearby fields and forest. But when strangers appear, the mysterious footprints by the pond, the nighttime threats, and the gunshots make it all too clear Lynn has exactly what they want, and they won’t stop until they get it. . . .