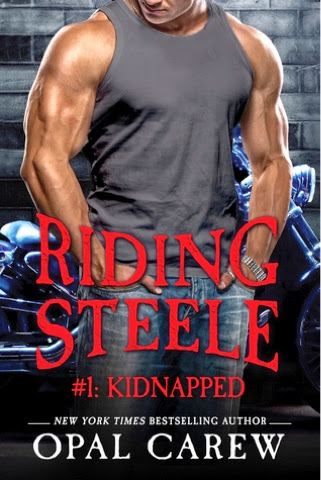 Being kidnapped by bikers is a harrowing experience, but for some reason, Laurie doesn’t feel as terrified as she should.  The leader’s steely eyes soften when he looks at her, and the others in his gang clearly know she’s hands off.  But does that include Steele’s hands?  Her brain resists him, but her body insists she wants those big hands all over her.

Steele doesn’t know how he wound up in this mess–with a kidnapped woman on his hands and the police hot on their trail.  Now he and Laurie are in hiding at an isolated cabin, and Steele has to figure out how to extricate himself…and steer clear of his accidental captive whose tight, slinky clubbing attire is making him think all kinds of dangerous thoughts…

Sarah’s Review: I really enjoyed this book! I can’t wait to read the next book to see what happens next. I realize it is a novella kind of read but I wish it was longer. That’s my only complaint of this book.
I was given this ARC for an honest and fair review.
Tweet