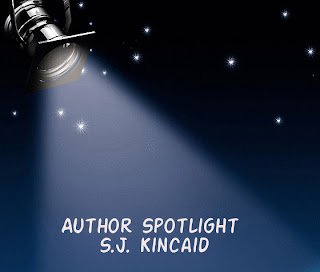 BIO: S.J. Kincaid was born in Alabama, grew up in California, and attended high school in New Hampshire. She also interned for a politician in Washington, D.C., and received degrees from universities in Illinois and Ohio, but it was while living beside a haunted graveyard in Edinburgh, Scotland, that she realized she wanted to be a writer. Several years, several manuscripts, and several jobs later, Ms. Kincaid now lives outside of Chicago, and INSIGNIA is her debut novel. 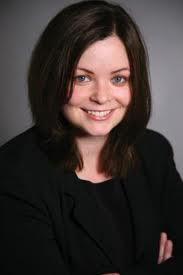 Follow S.J. Kincaid on her Website or Twitter
Interview:
What is your favorite ice cream?
Mint chocolate chip, for the moment.
If you could work with any author who would it be?
Ooh, this is hard to say. There are a lot of authors I love to read, but I’m not big on co-writing. I’m too possessive and controlling when it comes to my characters and storylines.
Who is your favorite author and is your writing style similar to theirs?
My favorite author is Joseph Heller. I wouldn’t say we have similar writing styles, but he does have an absurd sense of humor in Catch-22 that I really admire. I do think I have a bit of that.
What are your must-have accessories while writing?
Privacy. That’s the only one, the big one.
The dreaded writer’s block; Ever have it? If so, what do you do to get through it?
Yes, especially with book two. I was too worried about writing something amazing and nothing I wrote could live up to my own expectations. To get through it, I just had to get over myself and just write. You can’t really indulge in writer’s block once you have contractual deadlines.
How would you describe Insignia?
It’s a humorous sci-fi YA set in the near future about a teenaged videogamer who becomes a government weapon in a futuristic world at war.
How did you come up with the storyline for Insignia?
I actually came up with it after reading the article that gave me the idea for Insignia. I was reading about likely future technological developments, and one development mentioned was the increasing use of unmanned drones, especially for warfare. This image came into my mind of two great powers fighting a vast battle with fleets of these unmanned drones, and it struck me that with the human element removed, it was almost like a videogame. Everything sprang from that.
What question have you always wanted to be asked in an interview? How would you answer that question?
Nice one. Here—Q: If you could travel back in time and do one thing, what would it be? A: I’d go back to see Henry VIII on his death bed and taunt him with the fact that his greatest descendent, the monarch who’d overshadow him, was the daughter her never wanted, from the wife he’d executed: Elizabeth I.
Can you share a little of your current work with us?
Right now, I’m doing the finishing touches on Vortex and beginning book three of the series.
Do you have anything specific that you want to say to your readers?
Thanks for reading! 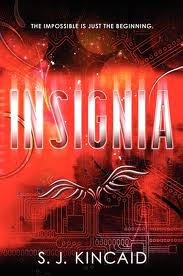 Insignia
More than anything, Tom Raines wants to be important, though his shadowy life is anything but that. For years, Tom’s drifted from casino to casino with his unlucky gambler of a dad, gaming for their survival. Keeping a roof over their heads depends on a careful combination of skill, luck, con artistry, and staying invisible.
Then one day, Tom stops being invisible. Someone’s been watching his virtual-reality prowess, and he’s offered the incredible—a place at the Pentagonal Spire, an elite military academy. There, Tom’s instincts for combat will be put to the test and if he passes, he’ll become a member of the Intrasolar Forces, helping to lead his country to victory in World War III. Finally, he’ll be someone important: a superhuman war machine with the tech skills that every virtual-reality warrior dreams of. Life at the Spire holds everything that Tom’s always wanted—friends, the possibility of a girlfriend, and a life where his every action matters—but what will it cost him?
Gripping and provocative, S. J. Kincaid’s futuristic thrill ride of a debut crackles with memorable characters, tremendous wit, and a vision of the future that asks startling, timely questions about the melding of humanity and technology.
Insignia Book Trailer


Review By Lisa : This book was a cross between The War Games and The Matrix. I totally LOVED it!! S.J. Kincaid has an awesome sense of humor which is seen throughout this book. There were so many times throughout the book that I was literally laughing out loud. The story and the characters are awesome! I highly recommend you read this book! I cant wait until the next book in the trilogy comes out.
a Rafflecopter giveaway
Tweet