On September 11th I went to the Smart Chick Kick It Tour here in Las Vegas. I almost didn’t go since Mother Nature decided to drench us in a massive rain storm with flash floods. But I’m glad it stopped raining so the BFF & myself could go and see Kelley Armstrong (Otherworld, Darkest Powers & Darkness Rising), Veronica Roth (Divergent), Melissa Marr (Wicked Lovely Series & Carnival of Souls), Rachel Caine (Morganville Vampires), Kim Derting (The Body Finder Series), Kami Garcia (Beautiful Creatures) & Richelle Mead (Vampire Academy) . I had such a great time seeing the ladies talk about their books, with each other & the audience. 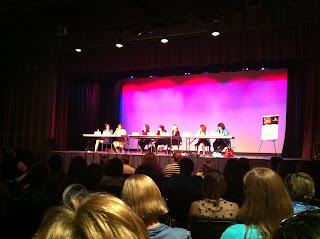 ﻿﻿﻿﻿﻿﻿﻿﻿
The interaction from all the ladies was great! And you could tell they get along great with one another and have a wonderful time together. As they should since they are on a tour together.
They did a lightening round where the audience asked them questions and every one on the panel had to answer them as quick as possible. I was cracking up at some of the questions they were getting asked. Example: Who was your first kiss? Who is your favorite author? Which majority of them said Stephen King, and one of the best questions was… Which one of your characters would you sleep with? I’m not even going to lie but when it was Richelle Mead’s turn you could feel that everyone in there wanted her to say “Dimitri.” Her response was, “None of them, because they aren’t reliable.” That seriously made me super sad! Because of all the guy characters from the ladies books I would have been hooking up with Dimitri in a heart beat! 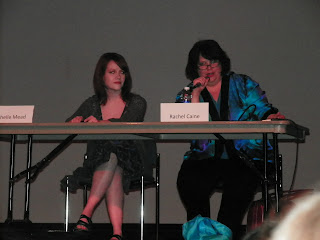 They talked about how old they were when they first got published? Richelle Mead was 9 years old when her short story was published in a magazine. 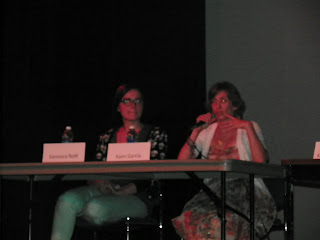 How long it took them to get published? Kami was so funny on this. Her book went to auction and she thought it was a horrible thing because that’s what they do to pigs at the fair that no one wants. Where actually if your book goes to auction it’s a good thing since everyone wants it! 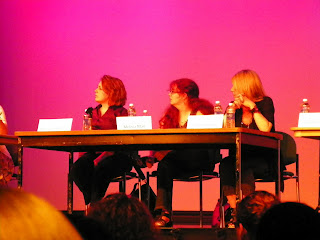 Where they get their ideas from? Kim said her husband throws out random ideas at odd times and wants her to start talking about them now! She also said his ideas are horrible! But she did get some ideas from him for her Body Finder Series.
After the panel it was time for the autographs and pictures with the authors. We were one of last ones in the big main line because there was a hundred people there and I was with a pregnant girl so we sat and waited until the line went down a bit. 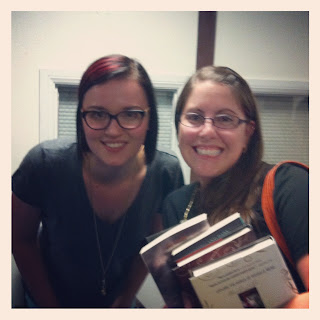 The first author I met was Veronica Roth. I can not wait until the third book in the Divergent Trilogy comes out and a movie to look forward to also! She was very nice and I LOVED her glasses! 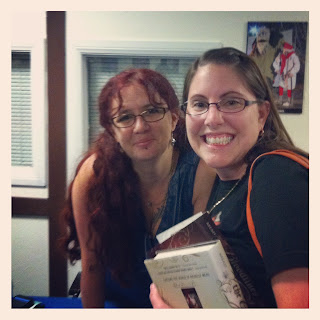 Then on to the wonderful Melissa Marr. She is just as laid back as I pictured with bad ass-ness added to her. I told her I was sorry my book was a little tore up, it went on a road trip with me, and she said, “Those are the best kind of books to keep.” 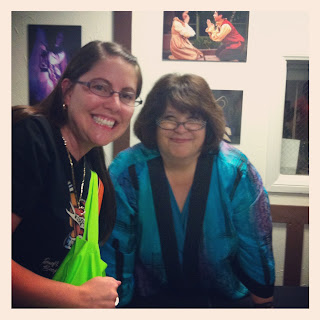 Rachel Caine was so funny in the panel and very nice at the table. Christina, the BFF, went in her line before me and she ended up with a book mark from her. When she came back to me she was so excited that she got the book mark because she doesn’t have any! She went back to get it autographed. 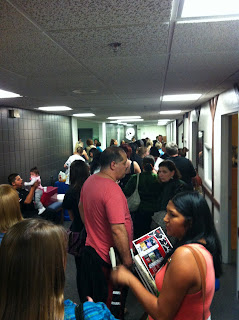 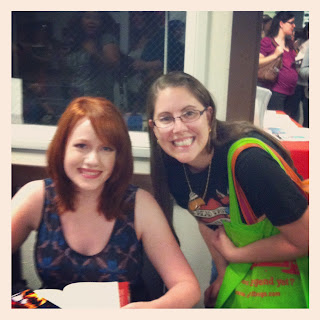 Then we got in a very long line to get to Richelle Mead. This poor lady was so, so sick and she had the longest line out of all the authors. But that line was so worth it! I had her sign a post card thing for Lisa from the VA Series, Richelle had never seen them before and asked where I got them from? I told her I got them from Comic Con and that Lisa & myself had gotten The Golden Lily from there also and we left a panel to go get the books. Richelle asked me what panel we left to go get the books? I pointed to Kami and I told her we left Kami’s panel to go get them. She started laughing and said, “We’ll keep that between us.”

This event made me so excited for the Las Vegas Book Festival in November! I can’t wait!
Tweet