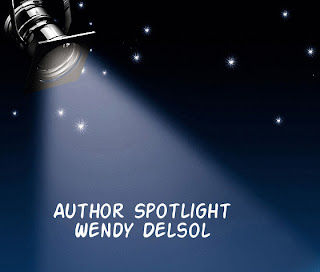 BIO: (Taken from amazon)
Wendy Delsol was born in Canada to English parents and grew up in suburban Detroit. She has an undergraduate degree from Michigan State University and a graduate degree from California State University, Long Beach.
After a year living and studying in France, Wendy moved to Los Angeles, where she remained for another twenty.
Post college, the rent was paid by working as a group tour coordinator in the travel industry.
Besides writing, her favorite job, ever, was mother to her two boys.
The writing bug bit at age forty. Wendy wrote her first novel and then took a year of writing classes through the UCLA Writers’ Extension Program.
When her husband’s job took the family to Des Moines, Wendy continued writing novels; she took classes through the University of Iowa Summer Writers’ Festival; and she joined a local critique group, SCBWI, and the YA chapter of RWA.
Her young adult novel, STORK, is represented by Jamie Brenner of Artists and Artisans and was released by Candlewick Press on October 12, 2010.
Her adult novel, THE McCLOUD HOME FOR WAYWARD GIRLS, will release on August 2, 2011 with Penguin Books.
STORK’s sequel, FROST, will be published on October 11, 2011.
The third and final (working title TIDE) in the STORK trilogy is slated for release in October of 2012. 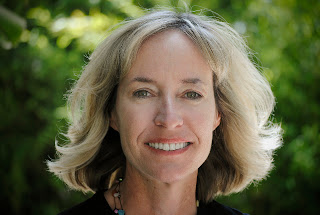 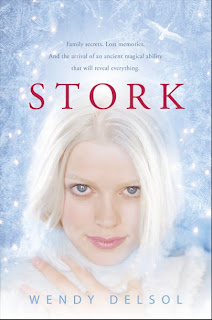 Stork
Family secrets. Lost memories. And the arrival of an ancient magical ability that will reveal everything.

Sixteen-year-old Katla LeBlanc has just moved from Los Angeles to Minnesota. As if it weren’t enough that her trendy fashion sense draws stares, Katla soon finds out that she’s a Stork, a member of a mysterious order of women tasked with a very unique duty. But Katla’s biggest challenge may be finding her flock at a new school. Between being ignored by Wade, the arrogant jock she stupidly fooled around with, and constantly arguing with gorgeous farm boy and editor-in-chief Jack, Katla is relieved when her assignment as the school paper’s fashion columnist brings with it some much-needed friendship. But as Homecoming approaches, Katla uncovers a shocking secret about her past — a secret that binds her fate to Jack’s in a way neither could have ever anticipated. With a nod to Hans Christian Andersen and inspired by Norse lore, Wendy Delsol’s debut novel introduces a hip and witty heroine who finds herself tail-feathers deep in small-town life. 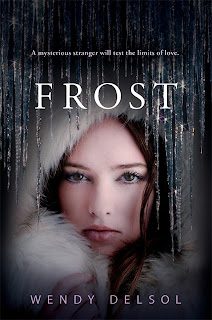 Frost
In this sequel to STORK, Katla Leblanc has to employ her grit, spirit, and special gifts to rescue the boy she loves.

After the drama of finding out that she’s a Stork, a member of an ancient and mystical order of women, and that her boyfriend, Jack, is a descendent of the Winter People able to control the weather, Katla Leblanc is delighted when all signs point to a busy and peaceful Christmas. That is, until the snowstorm Jack summons as a gift to Katla turns into the storm of the century, attracting Brigid, a gorgeous scientist who, in turn, attracts Jack. Between the school play, a bedridden, pregnant mother’s to-do lists, and keeping an eye on her aging grandfather, Katla doesn’t have time to question Brigid’s motives or deal with Jack’s increasingly cold behavior. But Katla’s suspicions mount when Jack joins Brigid on a research expedition to Greenland, and when the two of them go missing, it becomes clear that Katla is the only one who can save her beloved Jack from the Snow Queen who holds him prisoner. Adventure, romance, and myth combine in this winter escapade for teens who like a bit of fire with their ice. 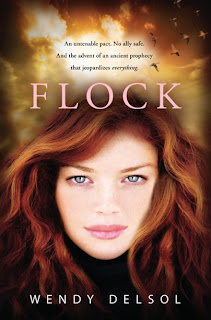 Flock
The climactic conclusion of a supernatural romantic trilogy starring a savvy, sharp-tongued heroine who taps into ancient Norse secrets.

After surviving her (shall we say) intense adventure in Iceland, Katla is psyched to be back for a blissfully uneventful senior year of homecoming and fashion explorations. But her hopes of dodging unfinished business are dashed by the arrival of two Icelandic exchange students: Marik, an oddly alluring merman-in-disguise, and Jinky, a tough gypsy girl. It seems Katla not only enraged the Snow Queen by rescuing her boyfriend, Jack, she also was tricked into promising her frail baby sister to the water queen — and Marik has come to collect. What’s worse, Katla doesn’t dare confide in anyone lest she endanger them, so even her soul mate, Jack, is growing suspicious. And now Katla’s stork dreams, her guide for matching babies with mothers, have become strange and menacing as well. Hold on for a thrilling finale as the heroine of Stork and Frost calls on her wits (and her wit) to protect those she loves and face a final mythic disaster. 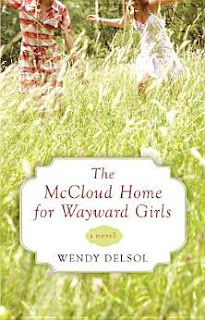 The McCloud Home For Wayward Girls
A compelling novel about a bed-and-breakfast that houses three generations of women- and their many secrets.

In the early 1960s, Ruby, a spunky unwed teen mother, was wooed and won over by the founder of the McCloud Home. Now, forty years later, the historic property has been converted into an inn that Ruby runs with one of her daughters, Jill. When Jill’s fourteen-year-old daughter begins to search for the identity of her father, she sets in motion events that will test the bonds that bind mothers, daughters, and sisters.

Jill unwittingly aids the forces of upheaval when she agrees to host the wake of the town matriarch. As the guests-including the matriarch’s handsome son and Jill’s vivacious, irresponsible sister Jocelyn- return to the small town, the convergence of people and memories uncovers rivalries, sparks romance, recalls heartbreak, and reveals a shocking family secret, one that could separate the McCloud women forever or lead them to the renewal of their powerful, enduring connection.

Buy these books: Here at Amazon or here at Barnes and Noble
Interview with Wendy
What is your favorite ice cream?
Baskin-Robbins peanut butter and chocolate.

If you could work with any author, who would it be?

J.K. Rowling, who created an amazing chart plotting out all seven Harry Potter books. I am myself somewhere on a lost tundra between plotter land and pantser land.  With a little time under Jo’s tutelage (she insists I call her Jo under said tutelage, by the way), I think I would develop better outlining skills.
What are your must-have accessories while writing?
Five or six sharpened pencils and a notebook.
The dreaded writer’s block; Ever have it? If so, what do you do to get through it?
Absolutely I’ve had it. There will always be days that are more productive than others. When at an impasse, I write lists of things that could happen. At least ten of them. And they can be silly or crazy. If nothing tempts me, I’ll write ten more. I can usually find an avenue back into the story from one of the prompts.
Have you ever studied Icelandic culture or legends?
No. I did research specific to the storyline I was developing, but I’ve never “studied” Iceland. I definitely have a fascination for the country. I remember a story about Iceland on the TV show  60 Minutes from years ago. It’s just such a curious place for a variety of reasons: geography, culture, history, etc.
What gave you inspiration for the Stork series?
When brainstorming for something new in the paranormal genre, I started thinking about the pre-birth angle. Generally, stories of ghosts, angels, and even reincarnation look at things from a post-death phenomenon. I flipped it to create my Stork society, benevolent or white witches charged with pairing hovering souls with the right mother on earth.
Did you have to do any research for the Stork series?
Yes. Because I use Norse mythology as the basis for the cosmology of my human Storks, I had to familiarize myself with the basic stories and characters. I also researched modern-day Iceland, the Icelandic sagas, Icelandic folklore, and Hans Christian Andersen’s The Snow Queen.
How would you describe Stork?
Stork is the story of Katla Leblanc, a sixteen-year-old California girl who moves to her mother’s hom

etown in Minnesota, where—much to her shock and surprise—she discovers she has an inherited magical ability: one that charges her with pairing hovering souls with the right mother.

Do you put any of yourself into Katla’s character?
Yes and no. Parts of Katla—her sense of humor, for instance—are me. Her wit and sarcasm is, of course, ramped up for effect. Plus, while writing, I have loads of time to work on a snappy remark or interior thought. In real life, I’m not that quick. The part of Katla that is not me is her bravery. I’m not a risk taker or adrenaline junkie. Not by any stretch.
Katla’s fashion sense in the book is modern; what do you classify yours to be?
Hmm. Probably a little more earthy or sporty rather than what’s trending. I value comfort over the latest fashions, with footwear in particular. Oh, and I’m a bargain hunter (which is code for cheap).
What question have you always wanted to be asked in an interview? How would you answer that question?
Federer or Nadal? The answer is Federer. He’s such a great champion and role model.

Can you share a little of your current work with us?
I’m so sorry, but this early draft is much too unpolished to offer up for consumption. For now, I’ll tell you that it’s set in an unspecified future and that things aren’t going so well for the planet.
Do you have anything specific that you want to say to your readers?
A heartfelt thank you! There are a lot of novels out there. Many, many worthy books. I’m tickled by and grateful for all readers.
Review of the Stork series by Lisa:
I loved this series! The storyline is unique and flowed nicely. Wendy’s writing is superb and humorous. There were parts within the series where I literally was laughing out loud. The incorporation of Icelandic mythology and culture was remarkable and in my opinion, spot on. Katla is a very likeable character that is quite easy to connect with. It was Katla’s determination that I admired the most. This series is unforgettable and has stayed in my mind since I’ve read it.
Now for the giveaway