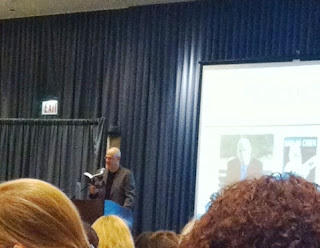 On September 29th, 2012 I attended the 8th Annual Young Adult Literature Conference in Naperville, Illinois. I had an awesome time. Being in the presence of such great authors as Maggie Stiefvater, Heather Brewer, and Harlan Coben, just to name a few, was simply surreal. This week’s blog post will be part two of a three part post since there is so much I would love to say about what happened that day and don’t want to bore you all doing it in one post. My blog weeks rotate with Sarah’s so the next post will be in two weeks and the final two weeks after.

One of the keynote speakers at the conference was Harlan Coben. I just have to say that he is hilarious!! He had the audience laughing throughout his entire speech. His speech was predominately about writing and how he comes up with ideas.
Harlan stated he finds his book ideas from everywhere however; he emphasized; “What’s done wrong can inspire you into a story plot.” Everyone makes poor choices at some point in their lives and why not be able to use those poor choices into an awesome story plot.
Harlan also firmly said, “Do. Absolutely. No. Research!” Harlan believes people use research as an excuse to get away from the writing. For instance when someone asks where they are in their writing they indicate their stuck in the research phase. Can you really say they are writing if their stuck in the research phase?  I don’t think so and neither does Harlan. Use your imagination more while you’re writing because when you get caught up in the research you’re going to get stuck in facts and bore your readers.
Harlan stated there are three things that make a writer. These are: Inspiration, Perspiration, and Desperation. You have to have inspiration in order to even start writing. Perspiration is actually doing the writing. Sitting in front of your computer screen sweating up a storm trying to get those words out of your mind so they appear on the screen. Desperation, well that is the feeling that you have to write because there is nothing else you can do. I love quote by Harlan, “I don’t like writing, I like having written.” Another good one, “I write only for myself that’s like talking to yourself.”
Being able to witness Harlan on stage was phenomenal. He is one of the most motivating speakers I have seen as well as one of the funniest. Although, I haven’t read any of his books YET (I bought one that day);  I totally will be in the future.
How many of you are writers? Or would like to be? What are your thoughts about his opinion on researching?
Tweet