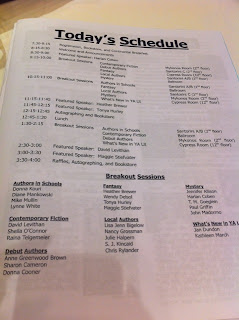 On September 29th, 2012 I attended the 8th Annual Young Adult Literature Conference in Naperville, Illinois. I had an awesome time. Being in the presence of such great authors as Maggie Stiefvater, Heather Brewer, and Harlan Coben, just to name a few, was simply surreal. This week’s blog post will be one of a three part post since there is so much I would love to say about what happened that day and don’t want to bore you all doing it in one post. My blog weeks rotate with Sarah’s so the next post will be in two weeks and the final two weeks after.

During the conference there were breakout sessions; and of course I had to attend the Fantasy session as Heather Brewer, Maggie Stiefvater, Wendy Delsol and Tonya Hurley were all on the panel. The author’s simply answered questions from the audience throughout the hour long panel. The author’s spoke about growing up and several aspects on writing. 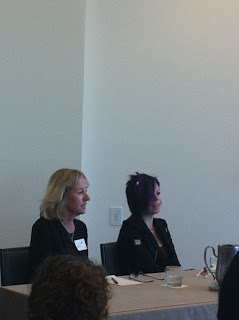 Heather Brewer read a lot as a child. Her motivation for this was escapism. Heather was bullied a lot in school and reading allowed her to escape the world she was living in. Heather stated she read Carrie by Stephen King at the age of twelve which made her realize she wanted to be a writer. After that point, Heather would write a lot; stating her writing then was “horrible”. Heather explained that writing is also a form of escapism for her. When asked how she knows how many books will be in a series, Heather responded, “The books tell me how many they will be”. Heather won’t let anyone see her manuscript until she has completed at least one review. She refers to the first draft as the “crap draft”. Heather has an awesome personality, a great sense of humor and really pulled in the audience while she was talking. 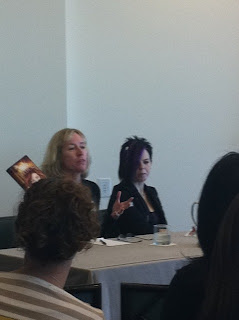 Wendy Delsol was not a strong reader at a child however; she did start college at the age of 17. Her first career was as a tour coordinator for a travel agency. She began a career move and moved into writing at the age of 40. When the discussion turned to writing; Wendy stated “If you can feel the passion behind the writing it can’t be bad writing.” It appears Wendy has a strict routine when it comes to her writing as she indicated she writes 500 words and has a fairly clean first draft with minor revisions. Wendy also meets once a month with other writers for critique. Prior to writing a book she plans out four major plot points so she has knows has a vision in place however; has the flexibility to allow the book to form itself. Wendy appears to have a strong writing ethic as indicated by her structured writing. 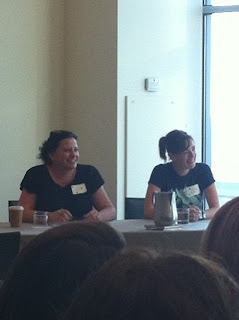 Tonya Hurley grew up in a small town where her only refuge was the local library; in which she went to frequently. Tonya played the drums since she was 8 years old and her goal as a teenager was to move to NYC to play in a punk rock band. Prior to becoming an author she worked as a publicist at a record company. Tonya stated, “I call my second draft my first draft.”  Tonya was very pleasant.  Hearing about the difficulties she endured growing up was empowering. 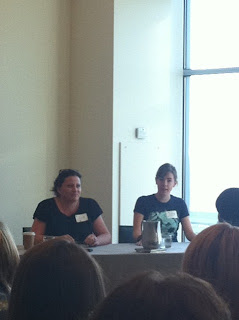 Maggie Stiefvater was self acclaimed “navy brat” as a child. Due to her father being in the Navy her and her family moved around frequently. Maggie indicated she would read her father’s books so she would be able to have something to talk to her father about when he was home. Maggie began writing at a young age; indicating she doesn’t remember not writing a story. As a teenager, Maggie was a competition bag piper and was involved in a Celtic band while she was in college. Maggie has two critique partners that read everything prior to her editor receiving it. When the discussion turned to writing, Maggie explained she tries to create the ends first along with the emotional character arcs prior to writing a book. Her Aha moments happen while driving down the road. I can’t say enough about Maggie Stiefvater; she is a fabulous writer and has a sense of humor which makes you laugh out loud.
I found this breakout session to be quite empowering. As a struggling writer myself, struggling to find time to write; I found it motivating. One point that all the authors covered was the importance of reading and how much power a book gives to a reader. I couldn’t agree with them more.
Has an author motivated you to do something?
Tweet